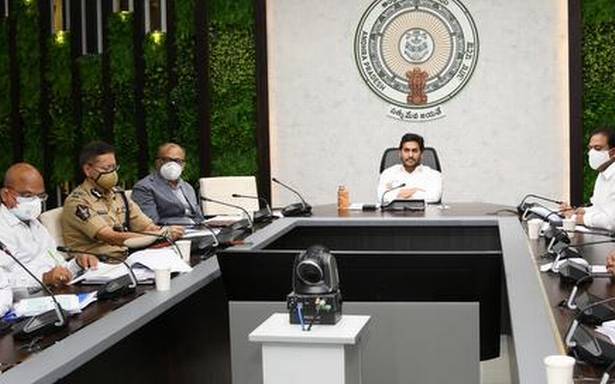 Chief Minister Y.S. Jagan Mohan Reddy has called upon the officials to draw up a long-term plan for increasing medical oxygen production with immediate focus on setting up at least a 300 Metric Tonne (MT) facility at Kadapa or Krishnapatnam so that it will also be useful to the steel plants proposed to be established there.

The daily consumption of medical oxygen in the State due to the second wave of COVID-19 surpassed 600 MT, which makes it necessary to prepare for future contingencies, he observed.

Addressing a review meeting on COVID-19 on Thursday, Mr. Jagan Mohan Reddy said efforts should be stepped up to make enough oxygen available in hospitals and prevent fluctuations in its supply through pipelines, lest the lives of patients should be endangered.

Officials told the Chief Minister that the allocation of oxygen was 360 MT on April 20 and now 590 MT, whereas consumption increased to more than 600 MT. Eight cryogenic storage tanks were provided to districts and the number of vehicles transporting liquid medical oxygen has been increased from 56 to 78.

About 210 MT of oxygen is being brought from Odisha every day in 36 vehicles. Two ISO tank containers were procured and 25 more would be coming by the middle of June. Naval teams were inspecting oxygen pipelines in hospitals.

Officials further informed Mr. Jagan Mohan Reddy that there are 47,693 beds in 669 COVID hospitals, of which 39,749 are occupied while 26,030 people are being treated under Aarogyasri scheme.

Global tenders have been called for supply of vaccines keeping in view the burgeoning requirement.