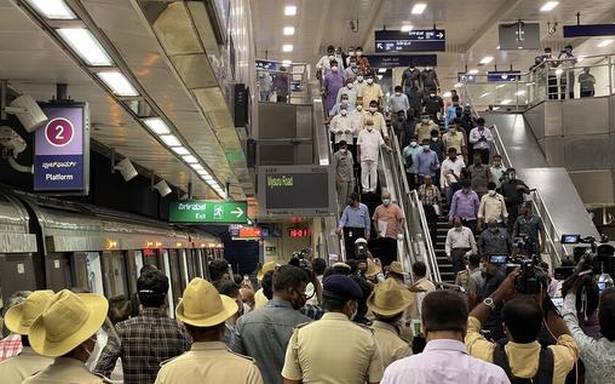 It will be opened for commercial operations in July

Chief Minister B.S. Yediyurappa inspected the extended Purple Line on Mysuru Road on Tuesday. The CM said that trial runs from Mysuru Road to Kengeri (7.53 km) have been completed and the line will be opened for commercial operations in July.

As per the plan, the Bangalore Metro Rail Corporation Limited (BMRCL) is likely to approach the Commissioner of Railway Safety (CRS) for clearance by the third week of June.

BMRCL has spent ₹1,560 crore for building the infrastructure and ₹360 crore for land acquisition.

The CM said that the entire extended Purple Line from Mysuru Road to Challaghatta (the station located after Kengeri) will be operational by March, 2022.

Once the Mysuru Road station to Kengeri line gets operational, the entire length of the Purple Line will be 26 km. It will cost ₹56 to travel from Kengeri to Baiyappanahalli. Officials estimate that the opening of the extended line will benefit 75,000 passengers.

The extended line has six stations; Nayandahalli, Rajarajeshwari Nagar, Jnanabharathi, Pattangere, Kengeri Bus Terminal and Kengeri. Parking facilities have been provided at Nayandahalli, Rajarajeshwari Nagar, Jnanabharathi, and two-level parking at Kengeri Bus Terminal with bus bays on either side of the station. The general public will be allowed to use the station for road crossing without entering the paid area.

At Kengeri Bus Terminal station, which is located off-road, BMRCL has plans to build a Foot Over Bridge to connect the bus terminal.

Each station has space on the roof to generate 250kw of solar power.

The CM said that the Karnataka government is committed to complete the ORR-airport line from Central Silk Board to Kempegowda International Airport via K.R. Puram and Hebbal in a time-bound manner.