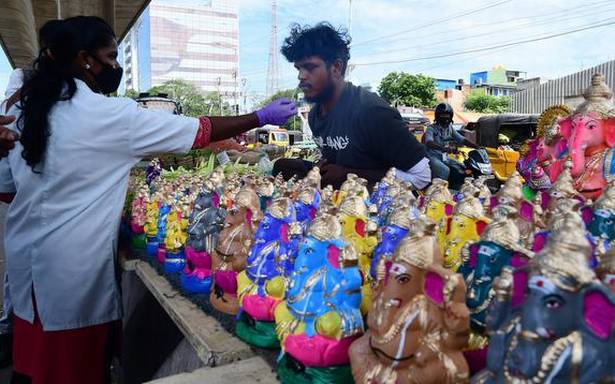 Poor adherence to norms also cited for rise in numbers.

Clusters arising from family and social functions, and a lack of adherence to the mask mandate and physical distancing norms at crowded places are among the reasons for the increase in the number of fresh COVID-19 cases in Tamil Nadu.

In the last few days, the State has been registering a marginal increase in the number of cases. As the fluctuations in the daily count continued in some districts, the figure crossed 1,600 on Friday and Saturday.

“This was mainly due to functions-based clusters and non-follow-up of social vaccine, namely wearing of masks and physical distancing at crowded places. Contact-tracing also contributes to numbers, but it is useful in preventing an exponential rise and controlling it as a localised cluster,” Health Secretary J. Radhakrishnan said. This was the case in Coimbatore, Tiruppur, Thanjavur and the delta districts, the outskirts of Chennai, and Chengalpattu and Tiruvallur districts.

“In Chennai, zones 5, 7, 10, 12 and 13 are areas where we have a positive growth of new cases. These include Kodambakkam, the Alandur-Mugalivakkam belt, Royapuram, Ambattur and Adyar,” he said.

In a message to the Collectors and the Greater Chennai Corporation on Friday, the Health Secretary underscored the need to be on alert as Tamil Nadu was showing a rising trend in cases. What was worrying was that instead of the earlier week changes linked to the increase in the number of tests on weekdays, this rise was due to the gradual increase in positivity, he noted.

Till vaccination covered a substantial population, monitoring of persons at crowded places, enforcing COVID-19-appropriate behaviour and contact-tracing in case of emergence of clusters assumed importance. Similarly, vaccinating the maximum number of persons to create immunity among those not exposed was important, he said.

“We need to focus on vaccinating the left-over eligible population and those eligible for the second dose. Effective contact-tracing and localised disease containment is important,” he added.

T. S. Selvavinayagam, Director of Public Health and Preventive Medicine, said, “We are able to pick up cases only because we are monitoring and reporting.”