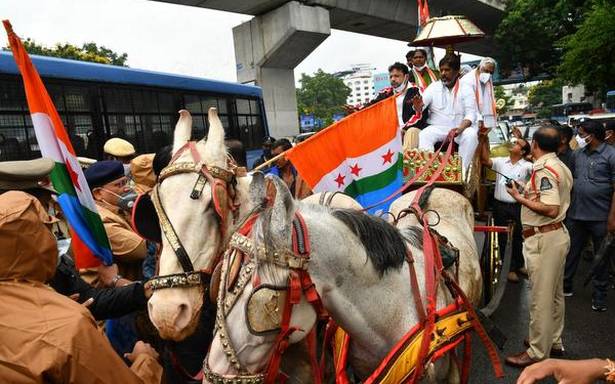 Party to move privilege motion in both Houses on police “excess”

Congress Legislature Party (CLP) has condemned the arrest of the party legislators by the police a few meters away from Assembly building when they tried to reach the Legislative Assembly and Council in a horse-driven chariot, to register their protest against high prices of diesel, petrol, cooking gas and essential commodities. Speaking after their arrest, CLP leader M. Bhatti Vikramarka said their attempt to reach the Assembly in a chariot was symbolic to explain how transportation was very dear due to high fuel prices. He stated that it was any member’s prerogative as to how he or she would reach the Assembly.

Another MLA D. Sridhar Babu sought to know from the Speaker and Chairman as to whether there were any rules or guidelines preventing the members from reaching by foot, bullock-cart, bicycle or other traditional modes of transport.

Two other MLAs T. Jayaprakash (Jagga) Reddy and D. Anasuya (Seethakka) sought to know why they were obstructed when they tried to reach the Assembly in a chariot, when TRS member T. Harish Rao was not stopped from scaling the desk of the Speaker in the combined State.