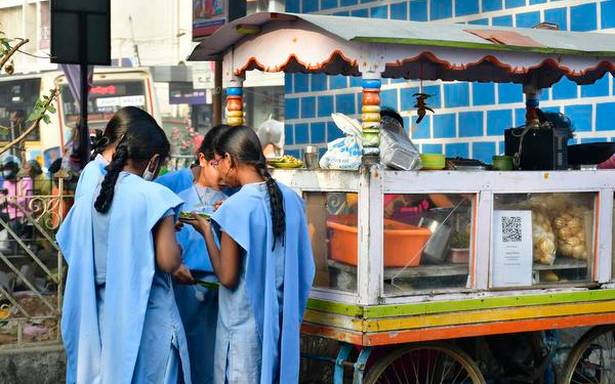 A Clean Street Food Hub is likely to come up along VOC Road near the Central Bus Stand in the city within a month or two.

The emphasis will be on hygiene and food safety to ensure a clean dining experience for consumers at the proposed hub. The department had initially toyed with the idea of promoting the hub near Chathiram Bus Stand but narrowed down on the surroundings of the Central Bus Stand subsequently. Vendors were too scattered around the Chathiram Bus Stand, explained R. Rameshbabu, Designated Officer, Food Safety and Drug Administration, Tiruchi.

The street food hub could have about 40 to 50 vendors. Currently, about 15 to 20 street food vendors were operating on VOC Road and some of those operating around the bus stand would form part of the hub, he indicated.

Ensuring use of quality ingredients in preparation of food, enhancing personal hygiene of cooks and suppliers, ensuring preparation of food in a clean and hygienic environment and standard mechanism to dispose of food waste and leftovers will be key focus areas of the initiative.

The Repurpose Used Cooking Oil’ (RUCO) programme of FSSAI, under which used cooking oil will be collected and converted into bio-diesel, will implemented at the hub. The vendors, cooks and suppliers would be required to wear aprons, masks and caps. Food products would be kept in uniform glass covered containers. Besides, the used plates would have to be washed properly as per specifications.

The initiative spearhead by the Department of Food Safety and Drug Administration in association with the Tiruchi Corporation and other agencies would serve as a model for all street food vendors across the city. The department has already conducted awareness workshops for street food vendors in the district and about 100 of them have been issued registration certificates.

Parikshan, an agency authorised by the Food Safety and Standards Authority of India (FSSAI), will conduct pre and post-audit of the street vendors operating along VOC Road and others around the Central Bus Stand as part of the initiative. Shortcomings pointed out in the pre-audit have to be rectified by the vendors. Sarathas has come forward to sponsor the audit charges of ₹1.15 lakhs, he said.

On Friday, officials of the Food Safety Department, the Tiruchi Corporation and the police held a preliminary meeting to discuss the implementation of the initiative. The Assistant Commissioner of Police, Cantonment, Ajay Thangam, and City health Officer Yazhini were among those who attended the meeting.

The police was requested to maintain a vigil on movement of anti-socials along the road where the hub is planned and ensure that it was not used as an open urinal. The corporation was requested to improve lighting and ensure regular clearance of garbage. The City Health Officer had assured that they would ensure that the garbage from the hub would be removed every three hours, he said.