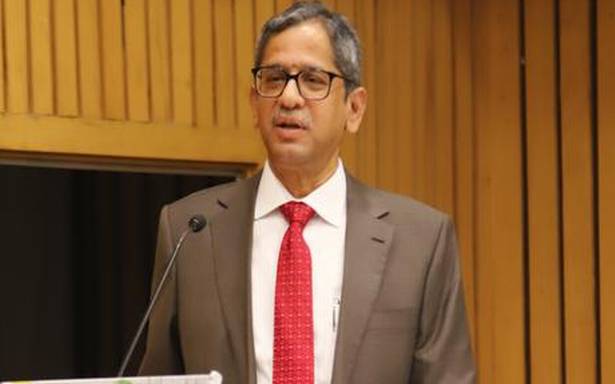 ‘It is your right. It is not a matter of charity’

“It is your right. It is not a matter of charity…Enough of this thousands of years of suppression,” Chief Justice Ramana said.

The CJI paraphrased Karl Marx to say, “Women of the world, unite! You have nothing to lose but your chains.”

Speaking to women judges and advocates of the Supreme Court at an event organised to felicitate him and the nine new apex court judges, the CJI said women constitute only about 30% of the subordinate judiciary.

“In High Courts, women judges constitute 11.5%. Here in the Supreme Court, we currently have four women Justices out of the sitting 33. That makes it just 12%. Of the 1.7 million advocates, only 15% are women. Only 2% of the elected representatives in the State Bar Councils are women…. There is no woman member in the Bar Council of India. This needs urgent correction,” Chief Justice Ramana said.

“I am also forcing the Executive for applying necessary correctives… I am happy to have colleagues in the Collegium who are progressive and determined to bridge the gap in the higher judiciary,” the CJI said.

The Chief Justice highlighted the need to increase gender diversity in legal education.

“I strongly advocate reservation of a significant percentage of seats in law schools and universities for women, as a first step. Ultimately, inclusion of women judges and lawyers will substantially improve the quality of justice delivery,” the CJI said.

The Supreme Court has the highest ever number of women judges serving now. The Ramana Collegium scripted history by successfully initiating the appointment of three women judges to the apex court in one go. One of them, Justice B.V. Nagarathna, is poised to be the first woman CJI in 2027.

“My sisters (women Supreme Court judges) here have carved out a name for themselves already. My dear sisters, your actions in upholding the Constitution will inspire women, not only in this profession but in all walks of life,” the CJI addressed his women colleagues.

Chief Justice Ramana said the lack of infrastructure, gender stereotypes and social attitudes have plagued the entry and progress of women in the legal profession.

The CJI said the need for basic facilities, especially for women, need to be addressed immediately.

“The survey I directed found out that out of 6,000 trial courts, nearly 22% have no toilets for women,” the CJI informed.

Chief Justice Ramana has been repeatedly pressing for the need to form a separate entity — National Judicial Infrastructure Corporation — to introduce inclusive designs for court complexes and create a more welcoming environment in them.