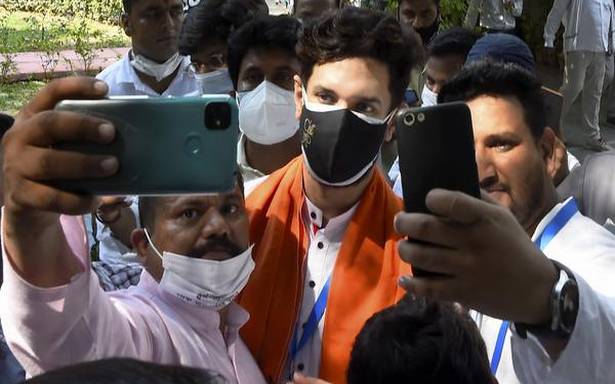 He blames Nitish for trying to engineer a split LJP

Locked in a tussle with his uncle over the control of the Lok Janshakti Party, Chirag Paswan on Sunday attended a national executive committee meeting in Delhi and said he would hold a road show across Bihar from July 5 on the occasion of his father and party’s founder Ram Vilas Paswan’s birth anniversary. Mr. Paswan blamed Bihar Chief Minister Nitish Kumar for trying to engineer a split in the LJP for long but “was not successful”.

“Like every year, the birth anniversary of founder of LJP and my father Ram Vilas Paswan will be organised with fanfare in the country and on this occasion I will take out an ‘Aashirwad Yatra’ [journey of blessings] on July 5 from Hajipur which will pass through all districts of Bihar in nearly two months before culminating in Patna with a call of party’s national council meeting. Thereafter, a mammoth rally will be held in Patna,” said Mr. Paswan after the national executive committee meeting of his group at his residence in Delhi. Mr. Paswan’s father Ram Vilas Paswan had represented Hajipur nine times in the Lok Sabha and currently his uncle Pashupati Kumar Paras is the LJP MP from there.

“The Bihar Chief Minister has been trying to make a split among Dalit voters’ unity for a long time. In this contest, first he made division into Dalit and Mahadalit and the LJP had opposed this policy of Mr. Kumar and him in the last Assembly election. It was because of the LJP’s opposition, the JD(U)’s seats were reduced to half in this election. And after this debacle, Mr. Kumar had decided to make a split in the LJP. It was under this plan, he tried to make split in our party by promising ministerial berth to a senior leader of the party but his plan was not successful,” said a release issued after the meeting. It said 66 members of the executive committee were present — 43 physically and 23 virtually — in the meeting.

“The LJP has never compromised out of fear of struggle. If we were to compromise we would have accepted Nitish Kumar’s offer of 15 seats in the last Assembly poll and our ministers would have been there in the State,” Mr. Paswan said. While condemning the misconduct of expelled party leader Mr. Pashupati Kumar Paras to mislead people as “unconstitutional”, the national executive committee passed five resolutions. The committee also urged the Prime Minister to confer Bharat Ratna on the late Ram Vilas Paswan and instal his statue in Bihar in view of his 50 unblemished years of active politics and his contribution to nation building. The committee members also opposed the use of LJP’s symbol by Mr. Paras.

Days ago Mr. Paras, uncle of Mr. Paswan, staged a coup with the support of four party MPs, out of total six, and removed Mr. Paswan from the post of parliamentary party leader. Later, Mr. Paras was elected party president unopposed by the rebel group of leaders. Both the warring factions of the LJP claim to be the real custodians of the party. Mr. Paswan later nominated party leader and former MLA Raju Tiwari as LJP’s Bihar president. After the meeting, Mr. Paswan also sought his mother’s blessings saying the battle ahead is like epic “Mahabharata”. “Ninety per cent of the working committee members are with me. Except Delhi and Jammu and Kashmir, the presidents of all other States of our party are with us, They have support of only 9 people,” Mr. Paswan said.