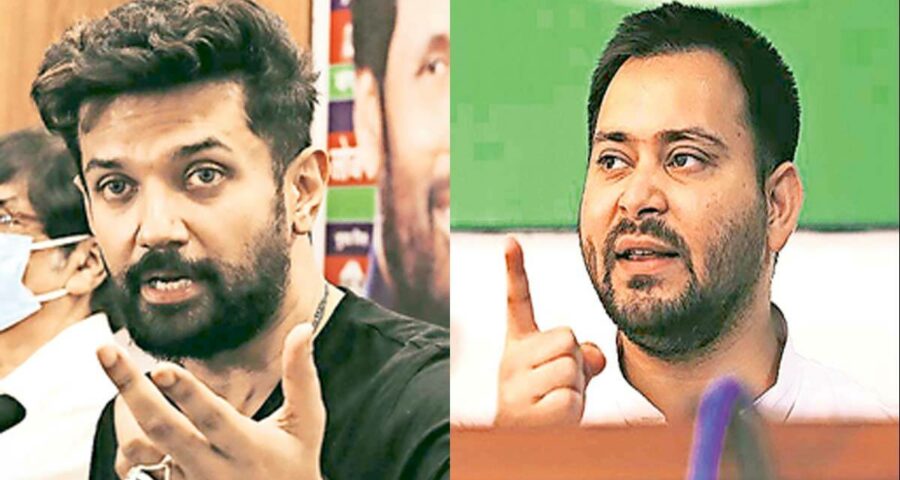 RJD Leader of Opposition Tejashwi Prasad Yadav Wednesday asked LJP leader and Jamui MP Chirag Paswan to join him, reminding him how Lalu Prasad had helped Ram Vilas Paswan get nominated to the Rajya Sabha in 2010 when LJP had no MP or MLAs. The RJD leader’s offer has come while Chirag is preparing to regain lost political ground by launching his Bihar yatra from Hajipur — his father Ram Vilas Paswan’s turf and rebel uncle Pashupati Kumar Paras’ Lok Sabha constituency — from July 5.

Tejashwi, who returned to Patna from Delhi on Wednesday, said, “It is Chirag who has to decide if he would continue to live with followers of Guru Golwalkar’s ‘Bunch of Thoughts’ or with followers of BR Ambedkar, the maker of Indian Constitution.”

Without naming JD(U), Tejashwi took an indirect swipe at Bihar CM Nitish Kumar. “There are people who are good at scheming. These people also feign ignorance about political happenings in the state.”

Tejashwi was referring to Nitish Kumar’s remarks that he had no knowledge of happenings within the LJP. “It is because of this ignorance that Bihar has come to such a pass. There has been unemployment and hunger,” the RJD leader said.

“RJD had helped Paswan-ji get nominated to Rajya Sabha in 2010 when LJP had no MPs or MLAs,” he said.

While Chirag has not responded to Tejashwi’s remarks so far, the LJP leader has given clear hints of his disenchantment with the BJP. Chirag, who blamed Nitish Kumar for breaking his party, has also accused the BJP of its “silence” and leaving him “in the lurch”.

This comes a day after Paswan had told The Indian Express that in politics, “never say never”, when asked if he was now open to tying up with the RJD and Tejashwi Yadav.

A senior RJD leader close to Tejashwi Yadav said that “while not immediately”, there was political logic for the two to come together. “In the past too, Ram Vilas ji had left the Atal Bihari Vajpayee cabinet because of differences with Modi after 2002. In fact, it was Chirag that supported the BJP completely. If he had wanted to damage the BJP and fought all of Bihar, the results would have been different. So now if he is feeling betrayed, and in Bihar politics cannot happen without alliances eventually, we have worked together in the past,” the leader said.

“Both command authority over their respective votebanks, and have time before the next election cycle… the two leaders and the two core bases have worked together… Paswans and Yadavs are political castes that are vocal, and not antithetical,” the leader said. Asked if Tejashwi and Chirag were in touch, the leader said, “They have a good relationship. Even when Chirag was close to NDA, it isn’t like they didn’t talk at all.”