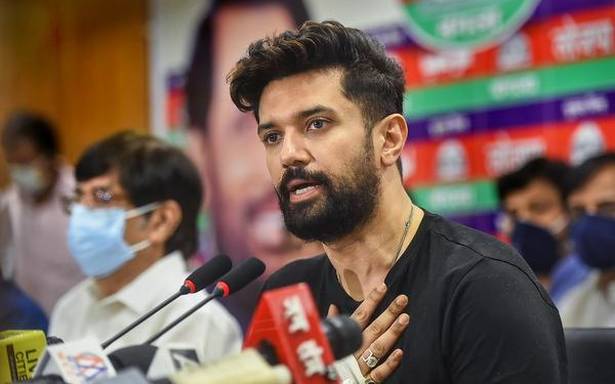 JD(U) believes in divisive politics and engineering defections, he alleges

Chirag Paswan on Wednesday accused his uncle Pashupati Nath Paras of betraying him, and the JD(U) of aiding the Lok Janshakti Party (LJP) rebels in crafting the split in the party.

Addressing his first press conference since the coup in the party, he, however, carefully sidestepped questions on the BJP’s role but did obliquely express his disappointment that they did not come to his rescue.

Mr. Paswan said efforts were on to break the LJP even when his father was alive. When asked whether he blames the JD(U), he said, “This is an internal matter of my party. How can I blame anyone if my own party members betray me? But yes, I cannot deny the role JD(U) played. They have always believed in divisive politics and engineering defections.”

Discontent in the party had been brewing since November 2019, when its founder and Mr. Chirag Paswan’s father, Ram Vilas Paswan, decided to anoint the son to the post of national president. The internal differences peaked soon after his appointment. Mr. Chirag Paswan replaced Mr. Paras, who for long held the post of Bihar State unit chief, with his younger cousin, Prince Raj. The decision to campaign against the JD(U) and contest the polls alone while remaining in the NDA during the 2020 elections was the last straw.

Throughout the poll campaign, Mr. Paswan asserted that he remains in the NDA and loyal to Prime Minister Narendra Modi. He went on to compare his devotion to Mr. Modi as that of Hanuman to Lord Ram.

When asked at the Wednesday press conference why he did not seek help from his ‘Ram’ (Mr. Modi), he said, “If Hanuman has to seek help from Ram, then what is the point of Hanuman or Ram.”

With a long legal and political battle ahead of him, Mr. Paswan is keen to prove himself as the rightful heir of Ram Vilas Paswan’s legacy. He declared at the press meet. “I am the son of Ramvilas Paswan. If I was not scared to contest alone back then, then I have no reason to be afraid today too.”

‘I truly became an orphan’

Mr. Paswan said he and his mother Reena Paswan made all efforts to keep the party and ‘parivaar’ (family) together. “When I lost my father, at least I had my uncle, but today that he has also deserted me, I truly became an orphan.” He accused Mr. Paras of betraying him when he was suffering from a long bout of typhoid and debilitated. “They tried to break the party when my father was in the ICU. And finally they decided to stab me in the back when I was bedridden,” he stated.

There was a total breakdown of communication between the two sides. Mr. Paswan remained unapologetic for his decision to contest alone in the Bihar polls, saying he did not compromise with his ideology. “Yes, if I had contested within the NDA, the LJP would have won many seats. But for that, the LJP would have had to genuflect in front of Chief Minister Nitish Kumar and the JD(U). Which we absolutely refused to do,” he added.

He also accused the five MPs, who led the revolt, of not standing by him during the Bihar polls. Mr. Paras was completely missing during the campaign, while the MPs were busy helping others, pointing to Khagaria MP Mehboob Ali Kaiser, whose son contested and won on an RJD ticket.