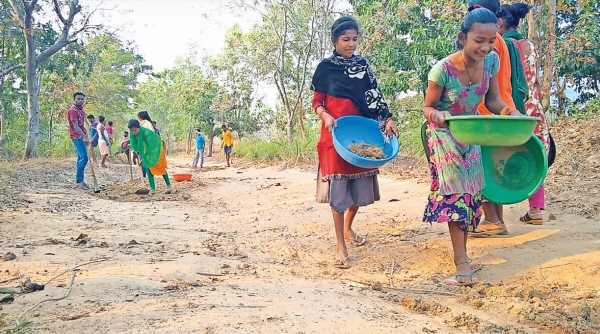 While the road has always been an inconvenience, what prompted the children to take matters in their hands, say villagers, was a minor accident involving two of them who were on their way to school on their cycles. Last week, a group of students from a village in Odisha’s Malkangiri district took it upon themselves to repair a road leading to their school.

The children, mostly upper primary students of the Talakata government school, picked up shovels, heaved plastic tubs with soil and gravel onto their shoulders, and toiled all day to fill in the potholes on the nearly two-kilometre stretch from their village, Padalput, to Majhiguda village in Korukonda block of the district.

“Villagers in Padalput use this road to commute to other villages, and children use it to get to their school in Talakata. Ever since I took charge as sarpanch three years ago, we had been including the construction of this road under our annual action plan, but the administration never approved it; they would cite some reason or the other,” said Bhima Barse, sarpanch of Patrel gram panchayat.

This year, following the government’s decision to merge schools with low enrollment, the only primary and upper primary school in Padalput was shut down and merged with the school in Talakata village. As schools partially resumed after the lockdown, children from Padalput were forced to undertake the 5-km route to the new school, including 2 km on the damaged stretch between Padalput and Majhiguda.

While the road has always been an inconvenience, what prompted the children to take matters in their hands, say villagers, was a minor accident involving two of them who were on their way to school on their cycles.

“All these months, we were home during the lockdown, so there was never a need to use the road much. Now that there is no school in our village, and classes have resumed for the upper primary sections, around 10 of us have started using the road every day. On Tuesday, two of our friends fell down and met with an accident. The situation will only worsen during the monsoons. So we thought if the elders won’t fix the road, we will. So all of us got together and decided to fill in the potholes and level the road,” said Naveena Padal, a student of Class 8.

With the students coming together, members of a local NGO, Team Sanghathan, and women from a Self Help Group also extended their help.

“We arranged for a tractor to transport the material, women from the SHG agreed to help without pay, and together, they managed to make the road motorable. We too have been writing to the authorities, but there was some confusion over whether the road falls under the Rural Development Department or the Panchayati Raj,” said Rama Krishna Chaudhary, a member of Team Sanghathan. The NGO pooled in Rs 2,000 to arrange for the tractors and the construction material.

The villagers said they had written one appeal to the Block Development Office and one to the gram panchayat, besides several oral appeals, but the road was never repaired.

“Accidents happened very often on that road. Ultimately, everybody got tired of petitioning the authorities, and we are glad that children took the lead to repair the road,” said Janaki Padal, a member of SHG Maa Durga.

The district administration, which had sought a report on the matter, has denied the allegations. “There was already a plan for construction of the road under MGNREGA. Work was underway on that day and as per a report submitted by our BDO, parents of these children were working on the site and probably they got the children involved too. There was no child labour and it is not correct that any money was pooled in to undertake the repair work,” said Malkangiri Collector Y Vijay.

A report submitted by the BDO states that construction of the road had been sanctioned in 2020-21 at an estimated cost of Rs 9.50 lakh.