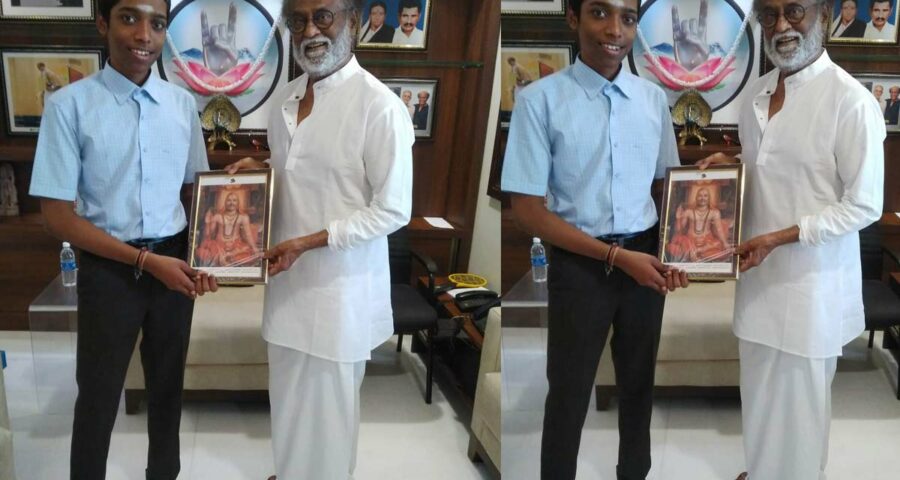 Today Indian chess grandmaster Praggnananandhaa R met South Indian superstar actor Rajinikanth along with his family members and the pics of the same are going viral on the social media. The champion chess player took to his twitter and shared few pics of his meeting with Rajinikanth and wrote, “A day to remember!!! Met @rajinikanth uncle today with my family! Inspired by his humbleness despite reaching great heights! #Respect #Magizchi.”

Praggnanandhaa is a popular Indian chess grandmaster. A chess prodigy, he earned the international master title at the age of 10, the youngest at the time to do so.  On 22nd February 2022, at the age of 16, Praggnanandhaa became the youngest player ever to defeat current world champion Magnus Carlsen, when he beat Carlsen in a rapid game at the Airthings Masters Rapid Chess Tournament. At Chessable Masters online rapid chess tournament in May 2022, he defeated Carlsen again, his  second win over him in three months, and advanced to the finals.

The 16 years old genius Praggnanandhaa will be part of the Indian contingent at his hometown event scheduled to kick start in less than a week’s time.

On the otherside, Rajinikanth was last seen playing the lead role in rural drama Annaatthe which was just average at the box office.