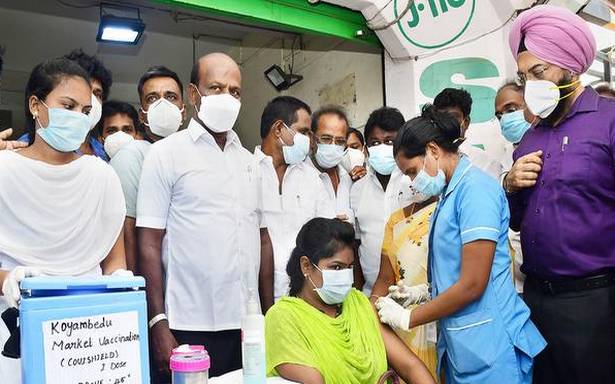 The Greater Chennai Corporation is planning to get ICU beds ready in its hospitals as part of the preparation to deal with a possible third wave of COVID-19.

Following a meeting with public health experts and epidemiologists in Ripon Building, the civic body has decided to have ICU beds at the community health centres in various zones of the city.

Pointing to the difficulties faced by officials in finding ICU beds for COVID-19 patients from the hotspots during the second wave, the team of experts has advised the Corporation to increase the number of ICU beds to manage any rise in the number of cases during a third wave.

In the first phase, at least 15 Corporation hospitals will get ICU beds. “This is an opportunity to scale up our community health centres,” said Corporation Deputy Commissioner (Health) Alby John Varghese. The civic officials said the initiative would benefit close to 20 lakh poor people, who depend on the Corporation hospitals for healthcare.

Another key suggestion at the meeting was the genomic surveillance of COVID-19 samples to manage the pandemic in the event of a third wave. The data from genomic surveillance and a serosurvey could be used for interventions at each hotspot in the 15 zones of the city, the officials said.

The Corporation plans to step up its surveillance as more commercial activity was likely to be allowed in the city in the coming weeks.

A multi-pronged approach has been prepared. This includes random testing in select hotspots to prevent clusters, intensified vaccination of vulnerable groups, penalising those not following standard operating procedures (SOPs), and creating awareness among the public to maintain social distancing and the compulsory wearing of face masks.

Corporation Commissioner Gagandeep Singh Bedi said as the State government was set to relax more lockdown norms, the civic body in association with the Greater Chennai Police has planned to be vigilant against any eventuality.

Three special squads called zonal enforcement teams comprising police and corporation officials have been formed for each of the 15 zones in place of one special squad. Mr. Bedi said the special squads in each zone would be involved in checking lockdown violation, compliance to SOPs by commercial establishments and markets, and would create awareness about maintaining social distancing and wearing of masks among the public through the public address system fixed in 45 vehicles.

Random swab testing camps were being held in various markets and places where people congregated in large numbers. In May, the Corporation conducted swab tests for 9,000 people in the Koyambedu market. Of these, 15 samples tested positive. Similarly, this month 3,400 tests have been conducted till date and one has been found positive. The fever survey workers have been directed to identify and vaccinate people with co-morbidities such as diabetes and hypertension .

The Corporation, since the launch of special squads from May till June 11, has fined more than 3,000 shops and 13,000 individuals for not following SOPs, not wearing masks, and maintaining social distancing. Mr. Bedi said ₹2.60 crore has been collected as fine.

The civic body has prepared a handbook on when to get tested, what to do if one tests positive, things to follow in home isolation, how and where to get emergency care, and the need to get oneself vaccinated, as part of its awareness campaign.