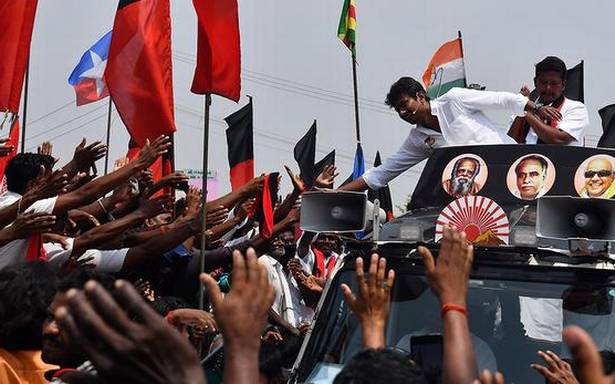 The ECI notice has not taken into account my entire speech, says DMK youth wing secretary

DMK youth wing secretary and star campaigner Udhayanidhi Stalin on Wednesday denied the charge made out in the show-cause notice served on him by the Election Commission of India that he had violated the model code of conduct during the campaign.

He was accused of claiming in a campaign speech that former Union Ministers Sushma Swaraj and Arun Jaitley had died, unable to cope with the pressure and torture from Prime Minister Narendra Modi.

In his response to Malay Mallick, Secretary of the Election Commission of India, Mr. Udhayanidhi said the charges were false and incorrect and the notice had not taken into account the entire speech, but referred only to two lines.

“The tenor and intention of the entire speech must be appreciated to decide in what context the extracted two lines were uttered and what were meant to be conveyed,” he said. He requested the Election Commission of India for the transcript of the entire speech so that he could furnish it with a full and proper reply.

The leader also wanted a copy of the BJP’s complaint, based on which the notice was issued.

Mr. Udhayanidhi said his speech was an answer to Mr. Modi’s criticism during his campaign at Dharapuram that he (Mr. Udhayanidhi) had reached the high office through a short cut. “I said Mr. Modi became the Prime Minister through a short cut, overlooking other senior leaders, while he was the Chief Minister of Gujarat. I said I had the list of senior leaders who were sidelined by him. I gave the names of L.K. Advani, Yaswant Sinha, late Sushma Swaraj and late Arun Jaitley. The words ‘pressure’ and ‘torture’ were not used by me in the context as sought to be projected in the notice.”

Reiterating that those two words could not be read in isolation, he said the entire speech was made in Tamil, and the meaning of the two words in Tamil was different from that of the words used in the notice.

Mr. Udhayanidhi said the entire speech was meant to answer the criticism against him and nothing more. “The notice does not establish that I have spoken about anyone’s personal life.”

Reiterating that he held Mr. Modi, Sushma Swaraj and Arun Jaitley in high esteem, the DMK leader said he respected the two late leaders as they had helped Tamils stranded in foreign countries reach India.

“Accept this interim explanation and permit me to give a detailed reply after I receive the the transcript of the full speech and the copy of the complaint,” he said.