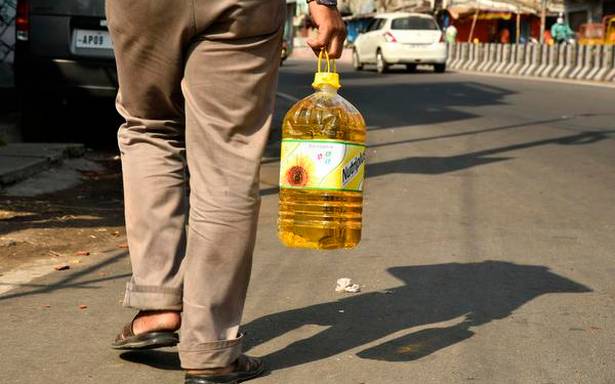 With edible oil prices remaining firm ahead of the festive season, the Centre has urged the States to take suitable action to ensure lower prices for consumers, including a review of their stockholding limits.

Food and Public Distribution Secretary Sudhanshu Pandey has written to the States outlining the initiatives taken to ease prices for consumers “keeping the festive season in mind” and convened a review meeting with them on Monday. He has also advised them not to allow any stakeholder in the supply chain to hold stocks in excess of two months of storage capacity.

“Demand and consumption of edible oils is different for different States and Union Territories as per the preference of the consumers… The Department of Food and Public Distribution (DFPD) is monitoring the prices of edible oils and their availability to the consumers. This is especially important in the context of the upcoming festival season in which demand for edible oils will increase,” the department said in a statement.

“It may be considered that any stakeholder (refiners, miller, wholesaler, etc.) should not hold stocks in excess of two months of the storage capacity,” the department has suggested, adding that various steps have already been taken by the Centre based on earlier interactions with the States and edible oil industry associations.

A stock disclosure notification has been issued, backed by a web portal to monitor the stock of edible oils and oilseeds on a weekly basis in the country.

Earlier this month, the Government slashed the import duties and the Agriculture Infrastructure and Development Cess levied on crude palm, soya bean and sunflower seed oils. The customs duty on edible grade palm oil, sunflower and soya bean oils was almost halved from 32.5% to 17.5% for the same period, with no cess levied on their imports. These duty cuts are applicable from October 14 to March 31, 2022.