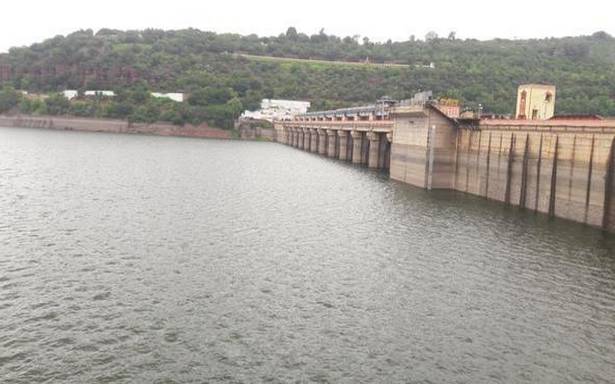 35 projects in Krishna Basin, 71 in Godavari Basin to come under Boards’ purview from October 14.

Seven years after their constitution under the provisions of the Andhra Pradesh Reorganisation Act, the Centre has notified the jurisdiction of Krishna and Godavari River Management Boards (KRMBand GRMB), transferring to them the operation of all projects, including generation of hydel power, in the two river basins in A.P. and Telangana effective from October 14.

The notification brings 35 projects in the Krishna basin and 71 in the Godavari basin, under the boards’ purview, empowering them to operate the headworks of barrages, dams, reservoirs, regulating structures, part of canal network, transmission lines and the power houses at the projects.

Dispute between A.P. and Telangana

The notification assumes significance in the backdrop of escalation in dispute between the two States over project works and hydel generation at Srisailam, Nagarjunsagar and Pulichintals reservoirs. While A.P. has been demanding notification of the boards’ purview for long, Telangana has been opposing it on the premise that handing over operation of projects without clarity on the States’ share of water would be meaningless.

“Although the Centre’s effortsare aimed at defusing the increasing tension between the two States over water sharing and power generation, it is likely to be a sail through murky waters since regulation of water – project-wise supply for irrigation and drinking needs as also hydel generation at projects – is going to be a tough job in the absence of clarity on water share of the two State as also the project-wise allocation”, a retired senior engineer who spent long years at one of the common projects said.

The KRMB is mandated to regulate the supply of water and power generated from the projects or components thereof having regard to the awards made by Krishna Water Disputes Tribunal (KWDT), any agreement entered into or arrangement made by the then existing State of A.P. with any other State or Union Territory and any other agreements that may be made by the co-basin States.

CISF to assist in day-to-day management

A.P. and Telangana have been directed to deposit within sixty days from the date of publication of this notification a one-time seed money of ₹200 crore each into the bank account of KRMB to enable it to discharge its functions effectively.

The most important aspect of the notification is the authorisation of the Central Industrial Security Force (CISF) to assist the KRMB in the day-to-day management of the specified projects and other works related to security assigned by the KRMB on such terms and conditions as laid down by the Central government.

The Central government mentioned Schedules-1, 2 and 3 for the purpose of this notification. Schedule-1 specifies the head works (barrages, dams, reservoirs and regulating structures), parts of canal network or components and transmission lines over which the KRMB will have jurisdiction as per decisions taken in the 2nd meeting of the Apex Council covering all the existing and on-going projects (subject to requisite approvals) in the Krishna river basin in both A.P. and Telangana.

Schedule-2 specifies the head works (barrages, dams, reservoirs, regulating structures) and parts of canal network or components and transmission lines of both A.P. and Telangana over which KRMB will have jurisdiction and shall perform functions as per Section 85(1) of Inter-State River Water Disputes Act, 1956 such as administration, operation, maintenance and regulation.

Schedule-3 specifies the head works (barrages, dams, reservoirs, regulating structures), parts of canal network of projects or components and transmission lines of both A.P. and Telangana over which the KRMB will have jurisdiction but the functions provided in Section 85(1) of the Inter-State River Water Disputes Act, 1956 will be performed by the respective States on behalf of the KRMB.

Completed and ongoing unapproved projects in the above schedules will be subject to appraisal and approval as per Inter-State River Water Disputes Act, 1956 and be in accordance with the decisions taken in the 2nd meeting of the Apex Council.

It is further stated that the mere inclusion of any unapproved project in the schedules does not confer deemed approvals.

Besides, the Central government stipulated that no person from A.P. and Telangana should be appointed as the chairman, member-secretary, members and chief engineers of the KRMB.

The Central government’s decision will be final if any question arises as to whether the KRMB has jurisdiction over any project under Section 87(1) of the Inter-State River Disputes Act, 1956.

Both the State governments have to stop all the ongoing works on unapproved projects as on the date of publication of the notification until the said projects are appraised and approved as per the provisions of the said Act and in accordance with the decisions taken in the 2nd meeting of the Apex Council.

If approvals are not obtained within six months after the date of publication of this notification, full or partial operation of the said ongoing unapproved projects will cease.