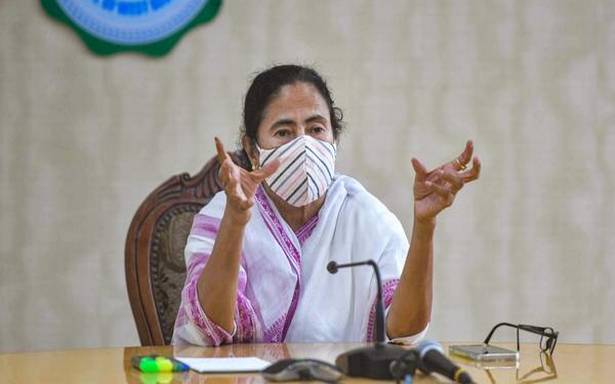 ‘We are trying to procure vaccines on our own but still we have reached only 1.4 crore people’

The Central government must procure and make vaccines for COVID-19 available free of cost to all the States, West Bengal Chief Minister Mamata Banerjee said on Wednesday

Ms. Banerjee said that Odisha Chief Minister Naveen Patnaik had called her on Tuesday on the subject of vaccination and she fully supported his view. "Naveen-ji called me yesterday, I fully support his views,” the CM said, adding that the Chief Minister of Kerala had also written to the Centre on the issue.

Ms. Banerjee said there were about 140 crore people in India and unless the Centre provided vaccines, it was going to take a lot of time to vaccinate the population.

“We have 10 crore people in the State, we are trying to procure vaccines on our own but still we have reached only 1.4 crore [people],” Ms. Banerjee said. She pointed out that the Bharatiya Janata Party had promised free vaccination to the people of Bihar during the Assembly polls but had not kept the promise.

“It is all a hoax. Temporary solution is not solution, it is pollution. India has a huge population. They are not sending vaccines to State governments and saying that, by December, India will be vaccinated. They don’t even send vaccines to States,” Ms. Banerjee said.

Asked about the Centre issuing show cause notice to Alapan Bandyophyay, who retired as Chief Secretary on May 31, Ms. Banerjee said that the chapter was closed now.

“No questions on Alapan Bandyopadhyay as the chapter is over now…Alapan has retired so I do not want to talk about it. Whatever happens, government will give full support to him,” she said.