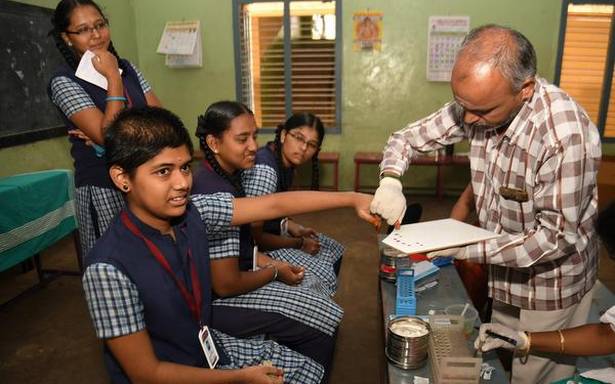 Concerned at the rise in cases of anaemia in India across the spectrum of its population, as revealed by the National Family Health Survey-5, the Centre plans to change the mode of testing for it, along with initiating discussions with the World Health Organisation on whether “racial characteristics” ought to be accounted for in determining anaemia levels in India.

“A matter of concern”

The Centre has an ongoing programme called Anaemia Mukt Bharat (Anaemia Free India) to reduce the proportion of anaemia among children to 40%, pregnant women to 32% and lactating women to 40% by 2022. The current NFHS thus shows lack of progress towards these goals.

Anaemia is commonly characterised by low levels of iron in the body. India has for decades diagnosed that a large fraction of its population, particularly women, are anaemic, and has an iron supplementation programmes ongoing in several States for years.

Anaemia is also believed to result from a lack of nutrition and inadequate intake of fresh fruits and vegetables as well as a deficiency of vitamin B-12. “This is a matter of concern and it was surprising that the proportion of the anaemic increased so significantly between the two editions of the NFHS,” said a senior Health Ministry official commenting on the results of the NFHS survey.

The official said the government would work with States that showed the most serious deterioration to determine if its ongoing programme of providing folic acid tablets and deworming pills were inadequate.

The WHO defines haemoglobin levels of less than 11 g/dL (decilitre or a tenth of a litre) in children 6-59 months as anaemic. For pregnant women it is 11g, for those not pregnant it is 12g and for men 13g. While a finger-prick is used to take a blood sample for testing haemoglobin, studies have shown that haemoglobin levels differ if the blood is collected from the vein. Other factors such as altitude and smoking history also alter haemoglobin levels.

“In the forthcoming NFHS, that will begin in 2022 end, we will employ the venous blood extraction method and analyse the results. While our focus will be on improving nutrition and achieving WHO standards, we will also have to see if other factors determine anaemia levels,” the official added.

Earlier this year, a team of researchers from the Sitaram Bhartia Institute of Science and Research, New Delhi, St. John’s Medical College, Bengaluru, and the Indian Institute of Population Sciences, New Delhi, speculated in an article in the Lancet Global Health that it was possible anaemia was being over-diagnosed in India due to a “wrong” (higher than appropriate) haemoglobin diagnostic cut-off.

The researchers used data from the Comprehensive National Nutrition Survey (CNNS) carried out in 2016-18 (under the aegis of the Ministry of Health and Family Welfare in collaboration with UNICEF and the Population Council) with a statistical approach.

The CNNS measured several biomarkers of health and nutrition in venous blood sampled from a large number of children across India. The prevalence of anaemia in these children was 35% when using the WHO cut-off, lower than what the NFHS surveys have found. One of the authors said that the current WHO definition derived from a predominantly white Caucasian population when current evidence suggested that healthy haemoglobin levels varied widely globally.