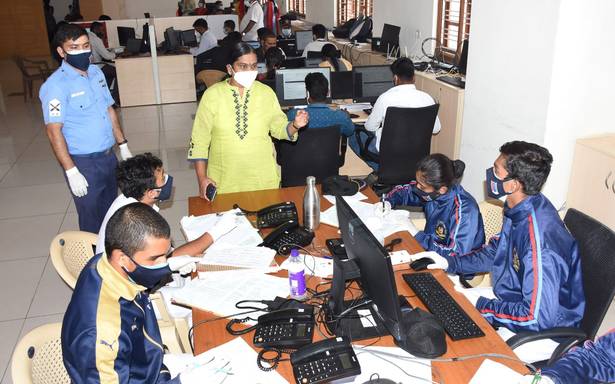 The calls received by Mysuru district Covid War Room Helpline have been showing a declining trend after peaking on May 6.

The Mysuru district administration had established a centralized District Covid War Room Helpline 0821-2424111 with 15 lines attending to calls 24×7 from April 28 2021 after the cases begun to spike.

According to data of the calls made from April 28 to May 21, the calls had peaked to 1,022 on May 6 before beginning to decline. The least number of calls received on the helpline was 368 on May 21. A total of 15,178 calls had been received by the helpline during the period at an average of 632 calls per day.

In terms of requests made by the callers, most number of patients (32.4%) had requested for oxygen beds followed by 17%t seeking HDU (High Dependency Units), 15.9% seeking ICU and 10.4% seeking ventilator beds. While 8.8% of callers had sought a general bed while 5.5% had sought online consultation and 2.9%t Remdesivir.

Nodal Officer, Mysuru District Covid War Room and Government Bed management, Col Dr Ashok S U, attributed the declining trend in the calls to the easier availability of oxygenated beds and the triaging at Covid Mitras.

The number of oxygenated beds were increased making their availability easier and at the same time the patients started approaching the triaging centres or Covid Mitras, which had begun functioning not only at all Government hospitals 24×7, he said.

Most of the calls received by the helpline originated from Mysuru City, Col Dr Ashok said. However, a number of calls had also come from not only rural areas of Mysuru district, but also neighbouring Chamarajanagar and Mandya district, he said.

The decline in number of calls also coincided with the gradual decline in the number of COVID-19 positive cases in Mysuru from a high of 3,500 cases on April 30 to between 1,500 to 2,000 during the second week of May.