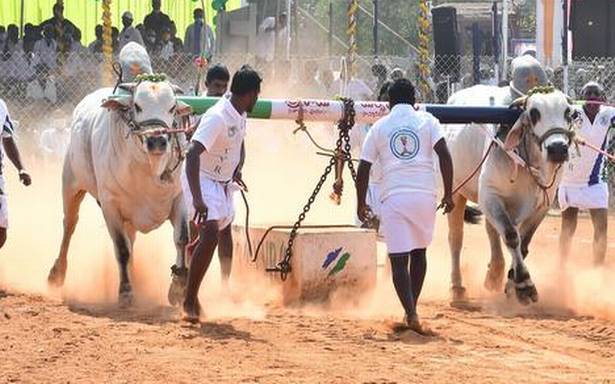 “The aim of organising Sankranti Rythu Sambaralu is to explain the sacredness of cow, encourage ‘Go puja’, protect the Ongole bulls and to promote dairying in agriculture,” said Mr. Venkat Rao, who is also the Chairman of Krishna District Cooperative Central Bank (KDCCB).

“Farmers from Andhra Pradesh and Telangana participated in the bull race and cow and bull beauty shows, which concluded on Tuesday. Prizes worth more than ₹30 lakh will be awarded to the winning animals, and food and accommodation facilities were provided to the farmers, bull tamers and trainers attending the sambaralu,” the organiser said.

Speaking on the occasion, Mahaswamiji said performing pujas to ‘Go matha’ was equal to doing pujas to all goddesses. He praised Mr. Venkat Rao for his efforts to keep the tradition alive and protecting cows.