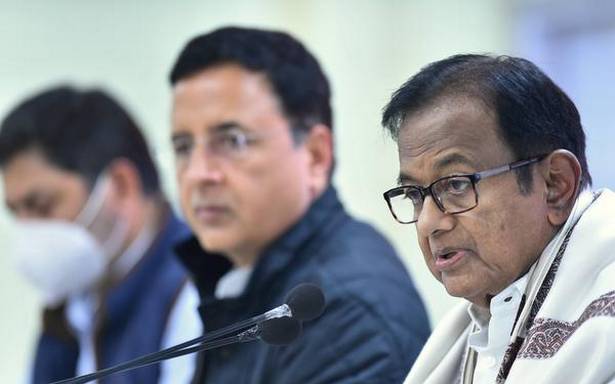 Why is there was no increase in Defence budget for soldiers, asks Rahul.

The Congress said on Monday that the Union Budget for 2021-22 was full of “deceptions”, with former Finance Minister P. Chidamabaram charging Finance Minister Nirmala Sitharaman with not sharing information such as imposing new cesses on a large number of products, including petrol and diesel.

He also accused Ms. Sitharaman of “conjuring” up mind boggling numbers in the Health sector, questioned her silence on Defence allocation that he claimed was “flat” and accused the government of “bleeding” public sector banks to sell them off

Separately, former Congress chief Rahul Gandhi tweeted that instead of “putting cash in the hands of the people, Modi Govt plans to hand over India’s assets to his crony capitalist friends”.

In another tweet, Mr. Gandhi wondered why there was no increase in the Defence budget for the soldiers, even though “Mr. Modi did PR photo-op with them on Diwali”.

Former Commerce Minister Anand Sharma too expressed his disappointment and said Ms. Sitharaman “chose to be timid when she was required to be bold”.

Addressing a press conference along with Congress chief spokesperson Randeep Surjewala, Mr. Chidamabaram said, “she did not mention Defence at all, as if the Chinese had vacated occupied Indian territory. She did not mention that Defence expenditure in 2021-22 will see no rise. It is flat at ₹3,47,088 crore, almost the same as the ₹3,43,822 crore in the current year”.

The senior Congress leader said the Finance Minister had “deceived” the people of India, especially the poor, working class, migrants, farmers, industrial units that had been closed down permanently and those who had lost their jobs, both regular and informal. He said the tax relief had completely bypassed tax paying working class and middle class.

“She deceived those who were listening to her speech, especially the MPs, who had no clue that she had imposed cesses on a large number of products, including petroleum and diesel: ₹2.50 on petrol per litre and ₹4.00 on diesel per litre is a cruel blow to the average citizen, including the farmers. It was a vengeful act against the thousands of farmers who took out the longest tractor rally in history,” he said.

Mr. Chidamabaram noted that though the Finance Minister had referred to farmers 11 times in her speech, agriculture sector had been “shortchanged”, micro small medium enterprises (MSME) sector was “dismissed” with a “meagre” allocation of ₹15,700 crore and there was no rescue plan for the closed units.

Talking about the large number of poll sops for Kerala, Tamil Nadu, West Bengal and Assam, he said “people are not fools” to understand the difference between actual expenditure and outlays.

The former Finance Minister said that not only do the current Revenue Deficit (7.5%) and the Fiscal Deficit (9.5%) point to a “fiscal situation mess”, but even the projected deficit figures for 2021-22 would send alarm signals to international lenders and investors without a clear roadmap for Fiscal Deficit to return to a target of around 3%.

The senior Congress leader also stated that the “borrowing” number had been under-stated’ on the “questionable” assumption that the disinvestment proceeds would fetch ₹1.75 lakh crore and tax revenues would increase by 15 per cent.

Mr. Chidamabaram also demanded a probe to find out how Bloomberg news agency put out the Revenue Deficit and Fiscal Deficit numbers 40 minutes before the Finance Minister read it in her speech.