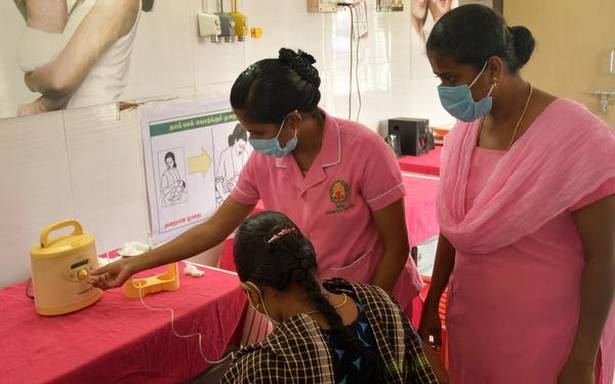 As many as 4,367 women have donated breast milk to feed 2,205 babies so far at Tiruchi Mahatma Gandhi Memorial Government Hospital.

As the Breastfeeding Awareness Week observed from August 1 to 7 drew to a close, doctors and nurses at the Special Newborn Care Unit (SNCU) say that the bank has helped saved many lives over the last few years.

The Breast Milk Bank at the Tiruchi GH is one of its kind in the district. While around 80% of the milk is given to babies born at the GH, requests also come from private hospitals, doctors said. The bank was set up during Breastfeeding Awareness Week celebration in 2015. “Breast milk is the first vaccine for a newborn. Until the baby turns six months, breast milk alone is sufficient for its nourishment. However, in some cases, babies are unable to get the milk. For them, we provide the milk through the bank,” a senior doctor said.

K. Senthil Kumar, neonatologist and in charge of the bank, said that a baby would require 30 ml to 100 ml of milk. “The initiative began when women whose children are admitted to the hospital started donating milk. It is because of their willingness that the initiative continues,” he said. Further, breast milk secretion will increase when more milk is consumed and it will in turn help the women’s health too, he added.

Awarness of the availability of such services, and encouraging women to breastfeed their babies for both theirs and the child’s health was on the agenda for Breastfeeding Awareness Week this year.

Along with awareness programmes held through Anganwadi workers, and the Integrated Child Development Services, the the Special Newborn Care Unit has also roped in Indian Academy of Paediatrics; Indian Medical Association; Federation of Obstetric and Gynaecological Societies of India; National Neonatal Forum; Ekam Foundation; Rotary Tiruchi Metro 3000; and Inner Wheel Club of Tiruchi Metro to spread the message. “We initiated this move this year, and we hope that from next year onwards, these associations will organise events of their own to create more awareness,” he said.