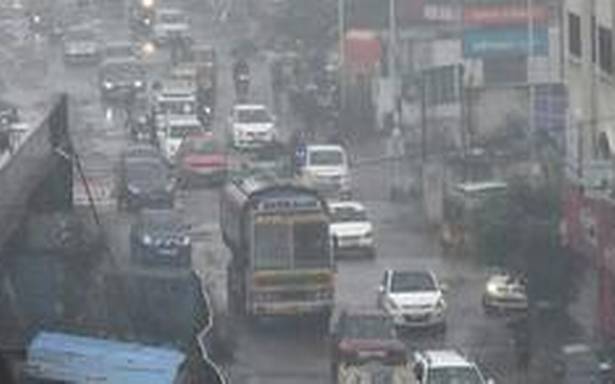 Main roads in Velachery, Adambakkam, Adyar, Pallikaranai and Madipakkam were free from flooding

Unlike north and central Chennai, the situation was marginally better in many parts of south Chennai barring some streets where waterlogging continued on Sunday.

The break from intense downpour on Sunday night provided much needed relief for the residents who were reeling under the fear of facing another 2015-like situation.

Though the main roads in Velachery, Adambakkam, Adyar, Pallikaranai and Madipakkam were free from flooding, many of the streets witnessed waterlogging although the water level had begun to slowly recede owing to the break from heavy spell.

In areas including Mohanapuri New Colony, Lake View Road and Shaw Wallace Colony in Adambakkam, residents had to wade through water. AGS Colony in Velachery was flooded on Sunday but the water had almost drained on Monday morning.

Some residents said, they began shifting things from the ground floor. B Yasmin, a resident of AGS Colony said, even if moderate rain occurs, they get ready to pack their things.

“Those living in the ground floor suffer the most. We wind up and head to the first floor and subsequently, the power goes off as well. It is high time authorities take some action to resolve this issue here. We suffer year after year during the monsoon,” she added.

For those residing in Ram Nagar, they say they experience a deja vu of 2015 floods every monsoon for the last six years.

Meenakshi Sundaram, a resident of north extension in Ram Nagar said, “Though the levels are starting to recede, there is still waterlogging on many streets. We also have to constantly keep checking the vehicles parked here.”

Many residents continued to have their vehicles parked on the Velachery flyover as they feared there could be another heavy spell and flooding. Some streets in areas like Nehru Nagar and Kamaraj Nagar in Adyar experienced waterlogging as well.