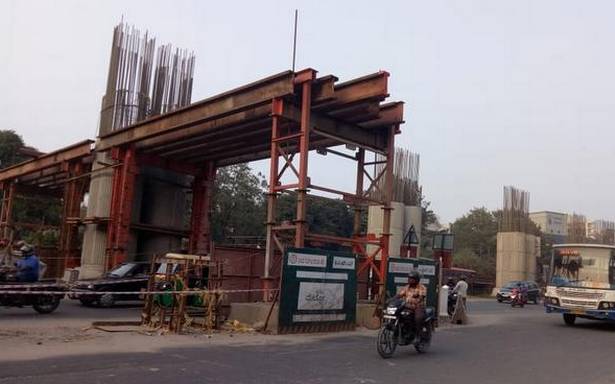 Traffic bottlenecks and disruption of vehicular movement, especially near Tin Factory, are proving to be a major hurdle for construction of the Namma Metro elevated corridor on Old Madras Road. To fix this problem, the Bangalore Metro Rail Corporation Limited (BMRCL) is spending ₹300 crore to acquire land for widening the road on either side. It will also build five bus bays to ease traffic congestion. A total of 75 properties will make way for road widening.

The existing stretch of road from the under-construction K.R. Puram metro station to Tin Factory will be widened to five lanes with the addition of three lanes. A portion of the stretch has already been widened to ease traffic.

Compared to other stretches on the line, Tin Factory is proving to be problematic given that the busy area is already congested. Officials hope that widening of the road will ease the problem. The proposed line from Outer Ring Road to Kempegowda International Airport will pass via K.R. Puram.

“Easing traffic congestion is very crucial for carrying out metro work,” said Channappa Goudar, General Manager (land acquisition), BMRCL. Land acquisition is also proving to be a challenge as a huge number of buildings are located on either side of the busy road.

“Final notification has already been issued for acquiring land from Benniganahalli lake towards K.R. Puram railway station. Under K.R. Puram cable bridge, the BMRCL is acquiring railway land to widen the road, and provide a link to Whitefield Road and ORR. The BMRCL will provide alternative land to South Western Railways (SWR) by acquiring land of their choice near the station,” he added.

Under the cable bridge, the BMRCL is acquiring over 5,000 square metres of land to widen the road. The official added that primary notification has already been issued to acquire several properties to widen the road from Tin Factory towards the flyover that links the ORR (Hebbal side).

Buses are one of the major reasons for congestion on the stretch. “In the absence of bus bays, Karnataka State Road Transport Corporation (KSRTC) buses going towards Hoskote and city buses headed towards K.R. Puram and other areas, halt in the middle of the road. The existing bus stops do not have adequate parking space. These bus bays will ease traffic in the coming years too,” said Channappa Goudar, General Manager (land acquisition), BMRCL. He added that BMRCL will use government land to build bus bays at Jyothipura.

Traffic police and motorists say that Old Madras Road is a nightmare during peak traffic hours.

Ishwar Prasad, a regular BMTC passenger, says, “Every day, people risk their lives standing near the ramp of the cable bridge to catch a bus towards Hoskote.”

“Congestion is a problem as all buses moving towards Hoskote stop right in the middle of the ramp of the cable bridge. In the absence of bus bays, we cannot force them to stop somewhere else,” said a traffic police personnel.

BMRCL is building new metro pillars near the down ramp of the cable bridge, but regular commuters said work needs to be expedited as it is adding to the congestion. “To construct the pillars, BMRCL occupies at least four metres of the road,” a commuter said.

Bhargava R., who travels on the stretch regularly, said it takes him more than 30 minutes to cross the one-kilometre stretch from ORR flyover to K.R. Puram. “People travelling towards Whitefield are waiting for the BMRCL to open the line as early as possible,” he said.