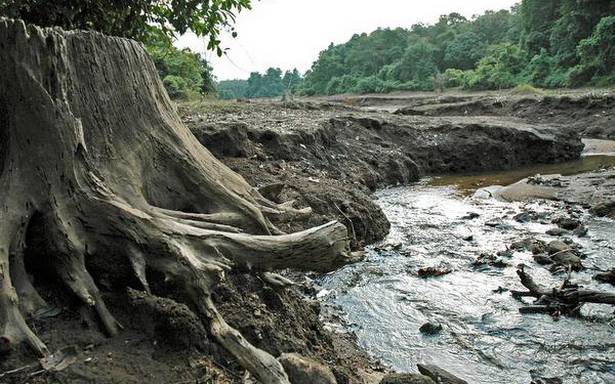 Effluents black in colour were detected from an illegal outlet into the canal connecting the Periyar river and Edayattuchal paddy fields located close to the industrial area at Edayar in Ernakulam district in Kerala.

The unauthorised pipe with six-inch diameter was revealed when the officials of the Irrigation Department carried out digging work along the banks of the river recently. However, the source of the illegal discharge was not ascertained as the work had to be stopped midway in view of technical and practical hurdles in carrying out such a major exercise.

Senior officials of the State Pollution Control Board pointed out that the water in the canal connecting the Periyar and Edayattuchal paddy fields was found to be yellow in colour. Samples were taken from both the illegal PVC outlet and the canal to ascertain the source of pollution, they said.

The Irrigation Department officials had closed the illegal outlet before they wrapped up the inspection work on Saturday. The canal joins the Periyar river at the upstream of Pathalam bund regulator.

The presence of an illegal pipeline into the canal was suspected by the State Level Monitoring Committee on Solid Waste Management appointed by the National Green Tribunal (NGT) and found mention in its report on the pollution of the Periyar river and Edayattuchal and Chakkarachal paddy fields.

The board had filed a report before the tribunal on June 8 stating that discharge of any sewage/trade effluent to this canal will ultimately reach the river Periyar at upstream of Pathalam bund, affecting the water quality. Earlier inspections had found the presence of effluents in the canal suspected to be owing to the illegal discharge through unauthorised outlets.

The board was awaiting action on the part of the Irrigation Department in making the concealed canal accessible for inspection. An attempt to study the possibility of illegal outlets into the canal in January had failed.

The report before the tribunal stated that directions were issued to the Irrigation Department to provide inspection chambers/manholes at definite intervals along the entire stretch of the canal to identify unauthorised outlets.