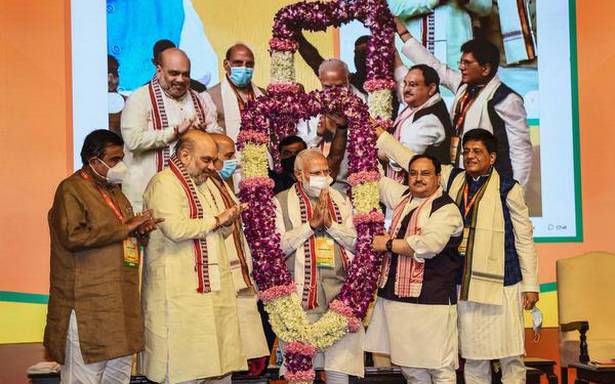 Setting the tone for upcoming Assembly elections in five States, BJP president J.P. Nadda on November 7 set targets to further strengthen the party’s organisation and asserted that its best is yet to come.

Addressing the party’s national executive, Mr. Nadda also reached out to Sikhs, who are in majority in poll-bound Punjab, by listing a number of measures the Modi Government has taken for the community, including expediting action against 1984 riots accused, facilitating foreign grants to gurudwaras and keeping langars outside the review of the Goods and Services Tax (GST).

He said that Mr. Nadda noted that this is the largest food programme in human history.

On BJP’s growth in West Bengal, Mr. Pradhan quoting Mr. Nadda said if one looks at its growth in the State from the political science perspective, then there will be very few parallels of it in Indian political history.

According to Mr. Pradhan, Mr. Nadda said that if one looks at the BJP’s vote share in the 2014 Assembly elections and the 2016 Assembly elections in West Bengal, and compares them with the 2019 Lok Sabha polls and 2021 Assembly polls, it shows substantial growth of the BJP in the State.

Setting new organisation targets for the BJP’s expansion, Mr. Nadda said the party will constitute booth level committees at all 10.40 lakh polling stations by December 25 this year and have “panna committees”, in reference to each page of voters’ list by April 6.

Citing the Taliban takeover of Afghanistan, Mr. Pradhan said the executive lauded Mr. Modi for his foresight of enacting the Citizenship (Amendment) Act, which aims at providing citizenship to minorities in some neighbouring countries, including Pakistan and Afghanistan.

Sharing the details of the resolution, Union Minister Nirmala Sitharaman said the resolution specifically mentions that “we shall ensure the party’s victory in upcoming Assembly elections”.

There is positive, energetic and unconditional support from the national executive to ensure the party’s victory in upcoming Assembly elections, she said.

The resolution condemned the Opposition’s “opportunistic” politics and its attempts to create fear during the pandemic.

Prime Minister Modi will address the valedictory session of the meet.

The BJP’s national executive meeting, which should be normally held once in three months according to the party’s constitution, is being held for the first time since the outbreak of the COVID-19 pandemic last year.

At the NDMC Convention Centre, the meeting venue, musicians from across the country played traditional instruments to greet those attending the meet. Prime Minister Modi while entering the venue met women, who in their traditional Chath attire and singing songs praising the Sun god, performed puja and rituals.

Chath will be performed in many parts of the country, especially in eastern parts of poll-bound Uttar Pradesh, Bihar and Jharkhand on November 10 .