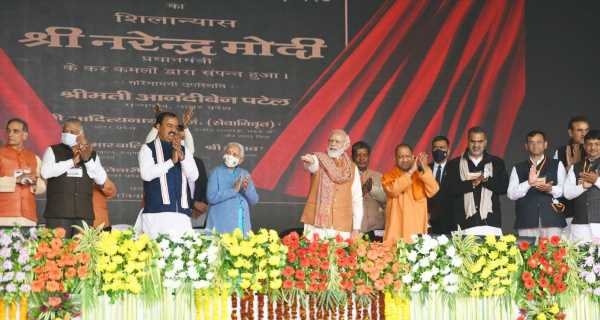 ‘I don’t think there is a wave in favour of the Samajwadi Party, or against the BJP.’
‘This election is largely about which party is able to build a larger social and political coalition.’

“The shift of some leaders to the SP is an indication of the growing disenchantment within the BJP leadership, either with the central or state leadership,” says psephologist and political analyst Professor Sanjay Kumar of the Centre for the Study of Developing Societies in New Delhi.

“This is creating a perception that Samajwadi Party is in the contest and in a position to defeat the BJP. Hence, people want to move from a sinking boat to the boat which seems to be is sailing,” Professor Kumar tells Rediff.com‘s Archana Masih in a two-part interview on the battle for UP.

Which way is the UP election is headed as you see it at the present moment?

It is a tight contest where the BJP has a slender edge. But this week, we have learned that BJP minister Swami Prasad Maurya has left the party for the Samajwadi Party followed by three other MLAs.

Hence, the equations are changing very fast. A couple of months ago, it appeared that the BJP was much ahead of the SP in the electoral race, but that gap seems to have narrowed down drastically to a great extent.

I feel it is a neck-to-neck race now, but still the BJP may be by inches ahead of Samajwadi Party.

The way things are unfolding, we don’t know how the situation is going to change in the next month or so.

What has the Samajwadi Party done or is doing to have covered the gap with the BJP? What do you think of the challenge Akhilesh Yadav is posing to the BJP?

He has been able to builds alliances with smaller regional parties which have a strong support base among different castes.

These group mainly constitute the lower OBC vote. One of the key elements in the BJP’s success in 2017 and 2019 was the massive shift of non-Yadav OBC votes in favour of the BJP.

The reason the Samajwadi Party has been able to cover this gap with the BJP is:

1. The alliances formed by the SP with regional parties. Two parties play an important role in this alliance — the Rashtriya Lok Dal in Western UP and the Suheldev Bharatiya Samaj Party in Eastern UP.

2. The shift of some leaders to the SP is an indication of the growing disenchantment within the BJP leadership, either with the central or state leadership.

Few other leaders have also shifted from other parties to the Samajwadi Party like Imran Masood who left the Congress for the SP.

This is creating a perception that Samajwadi Party is in the contest and in a position to defeat the BJP. Hence, people want to move from a sinking boat to the boat which seems to be is sailing.

This perception that a party could win the election or seems to be winning helps to mobilise floating voters — voters who take the voting decision in the last couple of days before polling.

In my estimation, in 2017 there were almost 25% floating voters. These voters make an assessment and side with a party that is most likely to win. This is called bandwagon effect.

The Samajwadi Party has started gaining that benefit even though polling will take place on February 10, but the perception or mahaul has been created by SP.

The alliances Akhilesh Yadav has struck will help in getting votes of non-Yadav OBCs coupled with its core support base among the Yadavs and Muslims.

Yadavs and Muslims together roughly constitutes about 30% of the total population of the state.

The lower OBCs are a sizeable 24% — if the SP can break the BJP’s monopoly among this section and can garner half of those votes, then it stands a good chance.

The Samajwadi Party is consolidating the non-OBC votes.

Speaking about perception — before the third covid wave halted political rallies, Akhilesh Yadav’s rallies were drawing large crowds. Does this mean there are rumblings or a churn against the BJP?

I disagree that crowds turn into votes for a party, but they certainly help a party in creating a perception — people start talking in the neighbourhood about the masses of people attending a rally.

This aids in building a narrative and a leader who is pulling crowds is able to create a perception that his party is winning, which in turn helps in mobilising the undecided or floating voters.

At the same time, there seems to be no strong anti-incumbency or perceptible anger against the UP government.

I do agree that there is no strong anti-incumbency or anger, but there is a simmering dissatisfaction with the Yogi Adityanath government among sections of voters.

I don’t think there is a wave in favour of the Samajwadi Party, or against the BJP.

This election is largely about which party is able to build a larger social and political coalition.

There are no issues as such, though the Samajwadi Party is trying to make the state government’s handling of COVID-19, unemployment, farmer agitation and price rise as an issue.

On the other hand, the BJP is highlighting improved law in order, imandar sarkar and trying to create a religious divide to show the SP as a party which cares for the minorities at the expense of the majority community.

The BJP can only cement the cracking OBC vote base by giving the overarching or bigger narrative of Hindutva to polarise the Hindu vote. 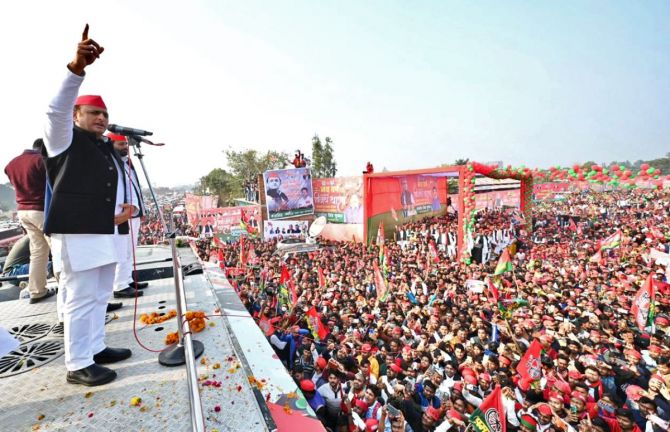 There was a time that the BJP was known as party of upper castes, but in recent years it has become far more broad-based and has a large number of OBCs, SCs and STs among its MPs and MLAs. When and how did the party start to bring about this change?

It added 19% votes to its existing vote share in ten years and almost doubled its support base.

The BJP achieved this only because it managed to make inroads among those sections of voters which traditionally did not vote for the BJP.

Till 1999, the party depended only on its core supporters of urban, educated, upper caste upper, class voters, but the BJP knew that if they want to break the ceiling, they need to expand to other locations and other sections of the society.

The BJP was also lucky in the 2014 elections because there was massive disenchantment against the ruling Congress and UPA government.

The government was seen as corrupt with allegations being leveled against some ministers. The BJP seized the moment and people were convinced with its narrative.

Narendra Modi as the prime ministerial candidate rode high on the Gujarat model of development. So, people had faith that this man who had brought wonders to Gujarat could also bring a change at the national level.

People were attracted by the promises made by Modi, including Dalits and OBCs.

Thirdly, nationalism. Every step taken by the BJP in the last seven-eight years has nationalistic overtones. They have been able to create a narrative around nationalism.

Even demonetisation was cleverly turned into a war of the poor against the rich and this narrative was actually accepted by large number of people.

The BJP’s slogan ‘Soch Imandar, Kam Damdar‘ has a draw among the people. They may question the damdar kam, especially in terms of what was happening in the state during the second wave of COVID-19, but people still don’t question the first part of that slogan.

They still believe that the intent of the government has been good and Prime Minister Modi wants to give a clean government. He cares for the welfare of the people and wants to take the country forward.

I think all this has helped the BJP in expanding its support with different communities.