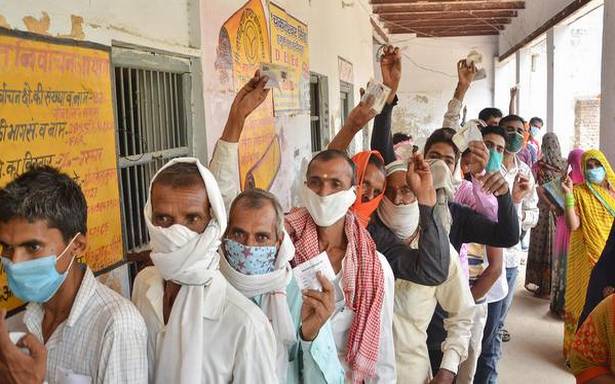 The BJP has kick-started preparations for the election cycle in 2022, when several Assembly elections, including in Uttar Pradesh, Punjab, Uttarakhand and later in the year in Gujarat are to take place, with the party’s general secretary (organisation) B.L. Santosh travelling to Uttarakhand last weekend and to Uttar Pradesh on Monday to hold organisational meetings.

The experiences of the second wave of the COVID-19 pandemic and the perception of the BJP and governments led by it during that time period weighed heavy on the meetings.

“The main focus of these meetings is, of course, to look at ways that the ‘seva hi sanghathan’ programme of rural outreach during COVID-19 pandemic announced by party president J.P. Nadda is carried out. But yes, organisational restructuring may also be discussed,” said a source who did not confirm whether this could mean the replacement of the party’s State president Swatantra Dev Singh.

“There is much unrest within the party, with several MLAs having publicly written to Chief Minister Yogi Adityanath on the many ways in which the administration had failed to respond to the pandemic and also the anger among the people with the ruling party. Stock taking is, therefore, important,” said the source.

“After the panchayat polls, many zilla parishads are yet to elect the heads of these district level bodies and, therefore, the party also needs to discuss how best to get their candidates elected to that post in maximum districts, get in touch with independents etc.,” added an Uttar Pradesh BJP office bearer.

The State government headed by Mr. Adityanath will be launching an intensive vaccination programme from June 1, and BJP workers have been asked to make sure that they are visible on the ground to ensure its success.

In Uttarakhand, Mr. Santosh addressed the State’s core committee, the first time after Tirath Singh Rawat replaced Trivendra Singh Rawat as Chief Minister. Here, too, the emphasis was on reaching out to rural areas by party workers in order to help deal with the pandemic in its second wave. The emphasis, say sources, was to bridge the perception divide that the BJP organisation was absent from the ground at a critical time.

Earlier in the week, RSS second-in-command, Dattatreya Hosabele had also visited U.P., sources said, as part of an previously finalised tour programme, but he held meetings at the organisational level as well.