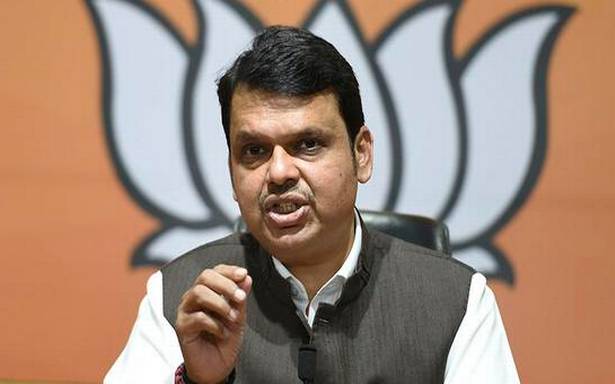 It must first discard its regional and linguistic chauvinism and practice ‘inclusive’ Hindutva, says ex-Chief Minister

The Bharatiya Janata Party (BJP) will never contemplate an alliance with the Raj Thackeray-led Maharashtra Navnirman Sena (MNS) unless the latter discards its practice of regional chauvinism and softens its antagonism towards ‘outsiders’, said former Chief Minister and senior BJP leader Devendra Fadnavis.

“The BJP and the MNS’ thoughts are very different… be it the question of north Indians, or the MNS’ discriminatory practices on the basis of language. The BJP cannot think of an alliance unless the MNS discards these practices. While we welcome the fact that the MNS has latched on to Hindutva off late, there can be no question of any alliance if there is not an ‘inclusive’ Hindutva in practice,” said Mr. Fadnavis, who was touring the rain-ravaged Sangli district in western Maharashtra.

He also said while there was no doubt that the welfare of the people of Maharashtra would take priority, this could not be achieved by harming the interests of those from other States living or working here.

In response, Mr. Thackeray, who is in Pune, said his stance has always been “very clear” from the very beginning and that if outsiders did not act in an overbearing manner towards Maharashtra’s citizens, his party would not bother them.

“What is there to ‘clarify’ about the MNS’ views…I have always spoken of the welfare of the people of Maharashtra which is also germane to the question of national welfare. The MNS’ credo is simple: you don’t impose on us and we won’t impose on you…Look at Assam and Mizoram today where problems of regional identity have snowballed into a crisis. So, it is essential to understand why such regional problems arise in the first place,” said the MNS chief.

Recently, Mr. Thackeray’s meeting with Maharashtra BJP chief Chandrakant Patil in Nashik had set rumour mills buzzing of a possible alliance ahead of the crucial civic polls next year.

At the time, both leaders had downplayed the meeting, saying they had been good friends since their student days and that the meet was merely a courtesy call.

After spiritedly campaigning — and failing miserably — against the BJP in the 2019 Lok Sabha election, the MNS is seen to be gravitating towards the saffron party.

This change of ideological direction is motivated by an attempt to seize the vacant ‘Hindutva’ space in Maharashtra following the ideologically opposed alliance of Uddhav Thackeray’s Shiv Sena (Mr. Raj Thackeray’s estranged cousin) with the NCP and the Congress in forming the MVA government to keep the BJP out of power in Maharashtra.