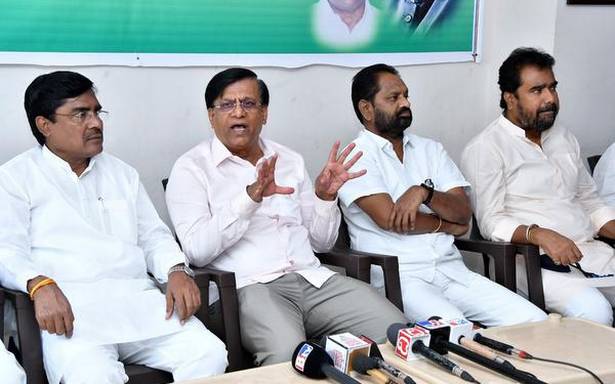 To cover up its failures, it has started a controversy now: Rayaraddi

Accusing the ruling BJP of triggering the hijab row and creating communal tension just to cover up its failures and divert people’s attention from the real issues, the former Higher Education Minister Basavaraj Rayaraddi demanded that President’s rule be imposed in the State on the basis of what according to him is a deteriorating law and order situation.

“The BJP government in the State did nothing for the welfare of the people and the development of the State. It has utterly failed in governance. It has no development-oriented initiatives to show. To cover up its failures and divert the attention of the people, it has now triggered the hijab row,” Mr. Rayaraddi told a press conference in Kalaburagi on Wednesday.

Taking serious exceptions to the Shivamogga incident in which right wing activists hoisted a Bhagwa Dhwaj on a flag post at a government college, the Congress leader demanded that Governor Thawarchand Gehlot intervene in the issue and recommend President’s rule under Article 356 of the Constitution.

“Miscreants hoisted a Bhagwa Dhwaj on a flag post that was meant for hoisting the national flag. Home Minister Araga Jnanendra is silent despite the incident that has happened in his home district. Clashes on campus of educational institutions across the State are being reported. Some of the senior Ministers in the Government and BJP Parliamentarians are issuing provocative statements to trigger communal tension. The Government has become a silent spectator as the RSS-backed party leaders and the Ministers are actively involved in it and it has failed to control the situation. I demand that the Governor immediately intervene in the issue and recommend President’s rule in the State before the situation goes out of control,” Mr. Rayaraddi said.

Responding to a query on the Government Order that made uniforms mandatory in colleges, Mr. Rayaraddi said that the order in question was more troublesome and likely to create more problems instead of addressing one at hand.

“As per the order, uniform is mandatory in both government and private schools and colleges. The government decides the uniform for government schools and the respective school managements will decide uniforms for private institutions. There are many institutions in the State that are run by Muslim community leaders and organisations. If their managements make burkha and hijab as their uniform and impose them on all, including Hindu girls, in their institutions, will it be acceptable to the Government? If turban is made a part of uniform in Sikh educational institutions, can it be imposed on Hindu and Muslim boys studying in such institutions? The Government should first withdraw the order as it tends to create more problems,” Mr. Rayaraddi said.