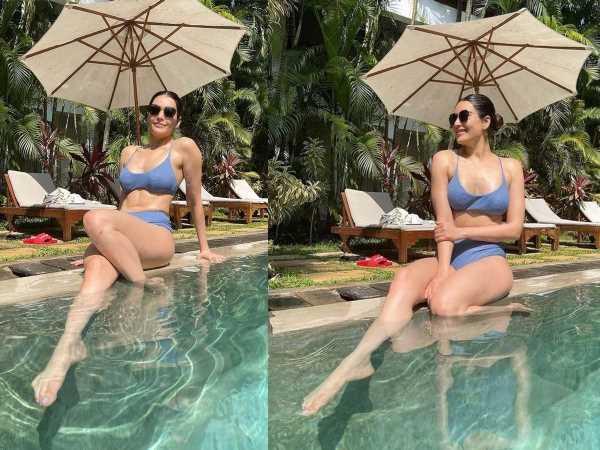 Television actresses are setting trends with their latest photoshoots! While many TV Hotties are going b*d in their photoshoots, a few of them have been raising temperatures on social media by sharing their h*t and s*xy pics in which they are seen posing in bikinis.  Now Karishma  Tanna is grabbing the attention  of her fans because of her bikini pic, which she shared  on her Instagram.

Karishma Tanna  keeps treating her fans and followers with her b*ld and beautiful pics. Recently, Karishma Tanna  took to Instagram to share h*t pictures of her in a two piece bikini beside a swimming pool. She captioned  the pic: Still Decembering state of mind. Can’t blame me.

Coming on the pic, the TV h*ttie  is seen striking a sensuous pose as she sits by the swimming pool. Well, this pic of her will definitely make you go crazy and dive into the pool.

Karishma  Tanna made her debut with  the TV show Kyunki Saas Bhi Kabhi Bahu Thi in 2001. She is well known for her roles in Baalveer and Qayamat Ki Raat.  She made her film debut as Nandini Thapar in Bollywood with Suneel Darshan’ Dosti: Friends Forever which was released in 2006. In 2013, she was seen in Indra Kumar’s successful comedy Grand Masti.

Karishma Tanna: The pool just got hotter with Naagin 3 actress by its side