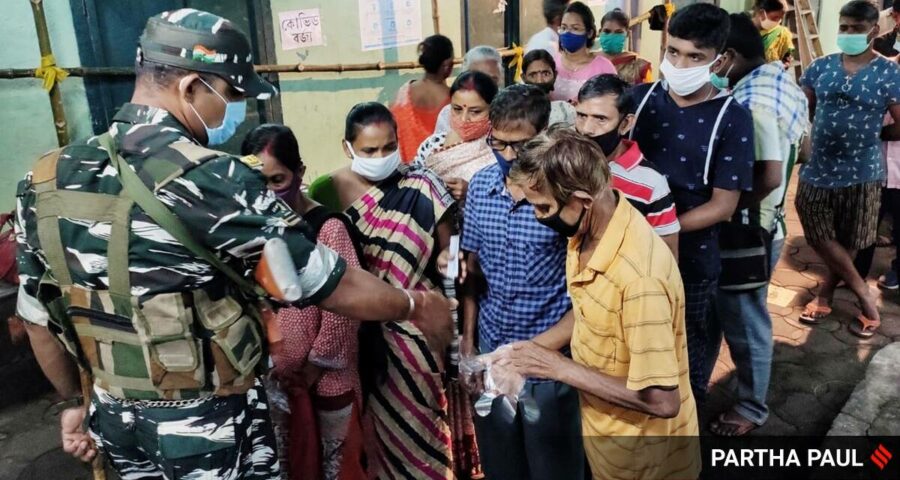 Bhabanipur Bye-Election Voting live Updates: The constituency, which has twice elected Mamata and is considered her home, will pit the Trinamool Congress supremo against two young faces — BJP’s Priyanka Tibrewal and the CPM’s Srijib Biswas. Bhabanipur Assembly Bye-Election 2021 Polling live updates: Polling began at 7 am on Thursday for the bypolls to the Bhabanipur seat, where West Bengal Chief Minister Mamata Banerjee is contesting, and two other constituencies amid tight security and stringent Covid-19 measures.

To ensure watertight security and peaceful polling in Bhabanipur on Thursday, the Election Commission on Wednesday decided to bring in 20 more companies of Central Armed Police Personnel.

The constituency, which has twice elected Mamata and is considered her home, will pit the Trinamool Congress supremo against two young faces — BJP’s Priyanka Tibrewal and the CPM’s Srijib Biswas. However, the polling, this time, assumes special significance as the CM is fighting to keep her chair, while the BJP is eyeing an encore of Nandigram where the Trinamool chief contested and lost to Suvendu Adhikari in the Assembly polls held earlier this year.

The bypolls are being held in south Kolkata’s Bhabanipur, and Jangipur and Samserganj seats in Murshidabad district. A total 6,97,164 voters are eligible to exercise their franchise in the three constituencies. Votes will be counted on October 3. The Pipili seat in Puri, Odisha, also goes to the polls today.

West Bengal Chief Minister Mamata Banerjee is fighting to retain her CM’s seat; 35 companies of central forces have been deployed across the constituency; Follow this space for latest news and updates:

Voting in currently underway at Jangipur constituency in Murshidabad amid tight security and strict Covid-19 norms.

Voting was delayed in a booth of Pipili due to EVM malfunction while glitches in the EVM machine were reported in two more booths.

A 90-year-old woman cast her vote at a polling booth in Bhabanipur on Thursday in the election that decides Mamata Bannerjee’s fate as CM.

Voting for bypoll is underway in Pipili, Puri. “We have made appropriate arrangements and have deployed extra security at sensitive polling booths. There are 32 mobile parties deployed for this election,” says Puri SP Kanwar Vishal Singh. (ANI)

Long queues were seen since early morning outside several booths across the constituencies. Voting will continue till 6 pm. The polling centres have been stocked up with masks and sanitisers as part of the Covid-19 guidelines, officials said.

To ensure watertight security and peaceful polling in Bhabanipur on Thursday, the Election Commission has brought in 20 more companies of Central Armed Police Personnel. With this, 35 companies of central forces have been deployed across the constituency.

Priyanka Tibrewal, the Bharatiya Janata Party (BJP) candidate for the Bhabanipur bypolls, said that the Mamata Banerjee-led West Bengal government is “in fear” right now, referring to the fact that Banerjee’s fate as chief minister hangs in balance, conditional upon the result of the by-election. “We’re hoping for fair elections,” Tibrewal said “I will visit polling booths in the area today. The state government is in fear right now.”

Voting has begun for the bypolls in the keenly-watched assembly segment of Bhabanipur and two other constituencies in West Bengal; as well as in Odisha’s Pipli. The voting is slated to continue till 6:30pm, according to the Election Commission. A hoarding put up by the TMC in Bhabanipur. (Express Photo: Partha Paul)

Bhabanipur bypoll: Everything but politics

Bhabanipur — the constituency in south Kolkata thrust into the limelight as the seat from where Mamata Banerjee will seek to enter the Assembly through a by-election on September 30, after her loss from Nandigram in the state elections earlier this year — has had an extended electoral season, and the fatigue is showing.  The conversation in the town’s popular addas, from Habu Da’s tea stall to the famous Balwant Singh’s Eating House, mostly focuses on the mundane — price rise, the unusually heavy rainfall this year, and Mamata Banerjee’s intervention to find a sponsor for the East Bengal football club.