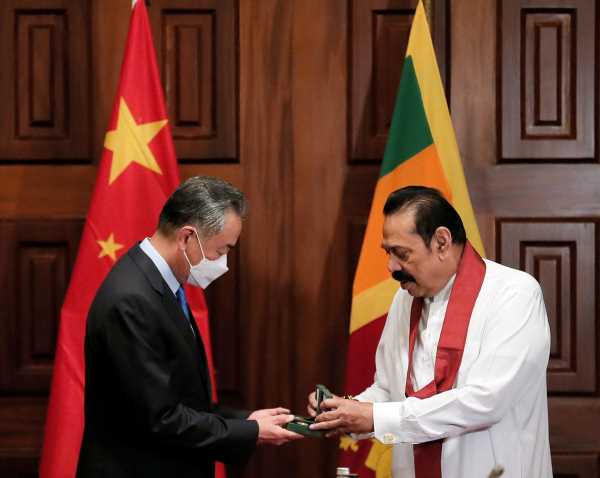 Chinese Foreign Minister Wang Yi on Sunday met Sri Lanka’s top leadership and discussed a host of issues, including the debt crisis faced by the island nation, investments, promoting tourism and the fight against the COVID-19 pandemic as the two countries marked the 65th anniversary of diplomatic ties, PTI reported.

Wang, who arrived in Colombo on Saturday from the Maldives on a two-day visit, first met the senior of the Rajapaksa brothers — Prime Minister Mahinda Rajapaksa — who took to Twitter to announce that he had a ‘very pleasant meeting’ with the Chinese state councillor.

After his meeting with Mahinda Rajapaksa, Wang declared open the Port City Marina Promenade to the public — built with China’s assistance on reclaimed sea — which is a major infrastructure Chinese project on the island.

The port city which is yet to become fully operational has a financial district which has been dubbed the new hub between Singapore and Dubai — with a marina, a hospital, shopping malls, and 21,000 apartments and homes.

Later, Wang met President Gotabaya Rajapaksa who told the Chinese leader that Sri Lanka would be much helped if consideration could be given to rescheduling of its external debt.

It is estimated that Sri Lanka owes debt payments to China in the region of $1.5 billion to $2 billion this year.

The international rating agencies have expressed doubts over the island nation’s ability to meet its international sovereign bond payments of $1,500 million, the first $500 million of which falls this week for payment.

Wang’s visit is taking place at a time when Sri Lanka is facing its all-time worst foreign exchange crisis. By December, the reserves position had plummeted to just one month’s imports or a little over $1 billion.

However, by the end of the year, the central bank announced that the reserves position had improved and the cash realisation was believed to have come from a previously agreed currency swap with China.

In recent months, the public has experienced shortage of many essentials due to the foreign exchange crisis. Import restrictions to save dollars have threatened cooking gas and fuel supplies in addition to the looming power cuts.

With the realisation of a currency swap from China the reserves topped $3 billion by the end of last year.

The relationship between the two countries has been under stress in the recent months. China protested against Sri Lanka’s rejection of an organic fertiliser shipment which the local farmers and some experts claimed was contaminated.

The Sri Lankan commercial high court blocked payment for it despite top level interventions by China. The Chinese blacklisted the Sri Lankan state bank for not honouring the payment.

Sri Lankan scientists had questioned the quality of the Chinese fertiliser consignment, saying that instead of helping, it could prove harmful to the crops.

However, on Friday, on the eve of Wang’s visit, the Sri Lanka’s People’s Bank released $6.9 million to the Chinese company.

China’s blacklisting of the Sri Lankan bank and the public clash between officials on both sides had come amid growing concerns over an acute agriculture crisis in Sri Lanka, following Gotabaya’s decision in May last year to abruptly switch from chemical to organic fertilisers.

The decision triggered protests from farmers who said the fertiliser ban would result in reduction in harvest, leading to a food crisis this year.

China in December suspended a project to install hybrid energy plants in three islands of Sri Lanka, citing ‘security concern’ from a ‘third party’, amid reports of India raising concern over its location.

In early 2021, India lodged a ‘strong protest’ with Sri Lanka on the award of the tender to the Chinese company.

Please click on the images for a look at Wang’s visit to Colombo. 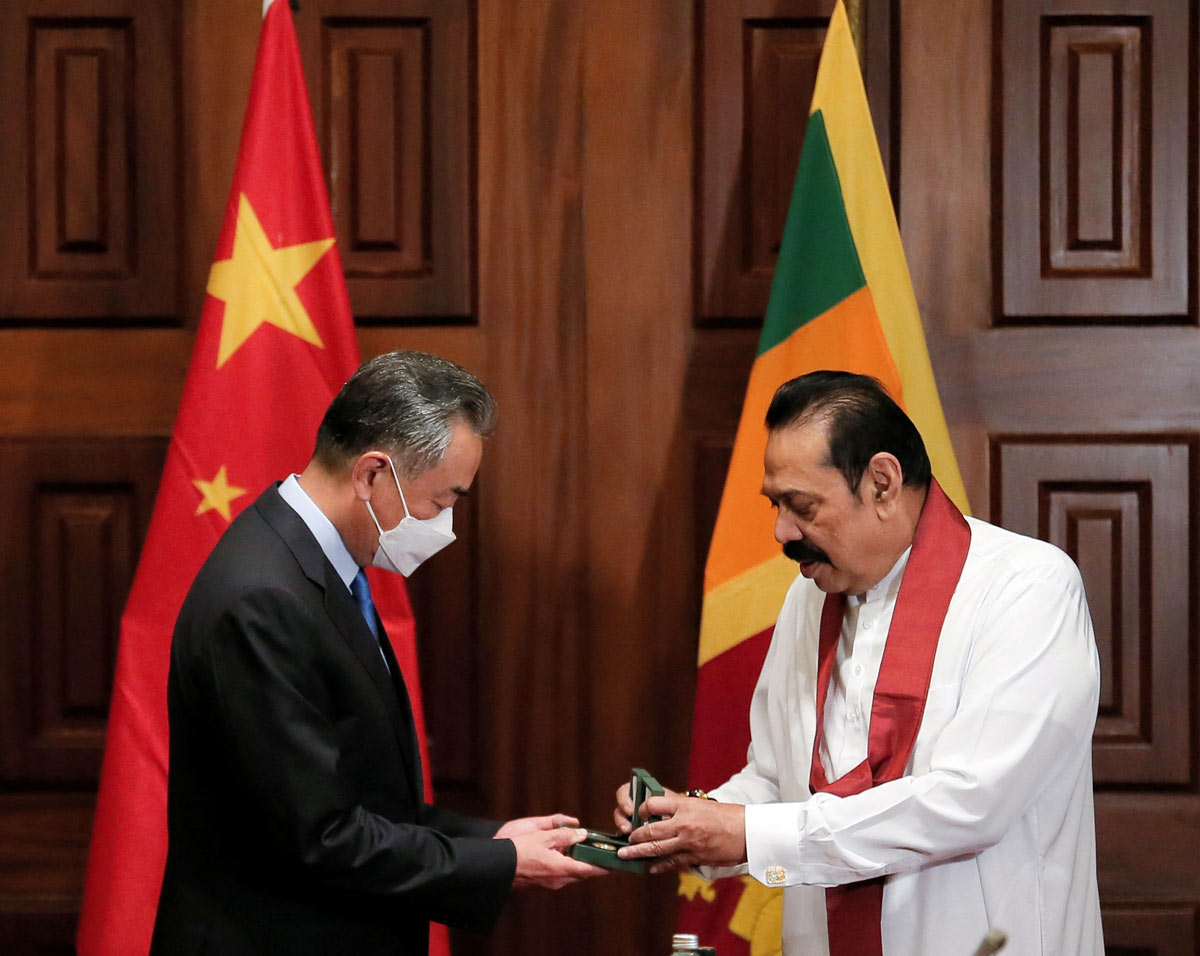 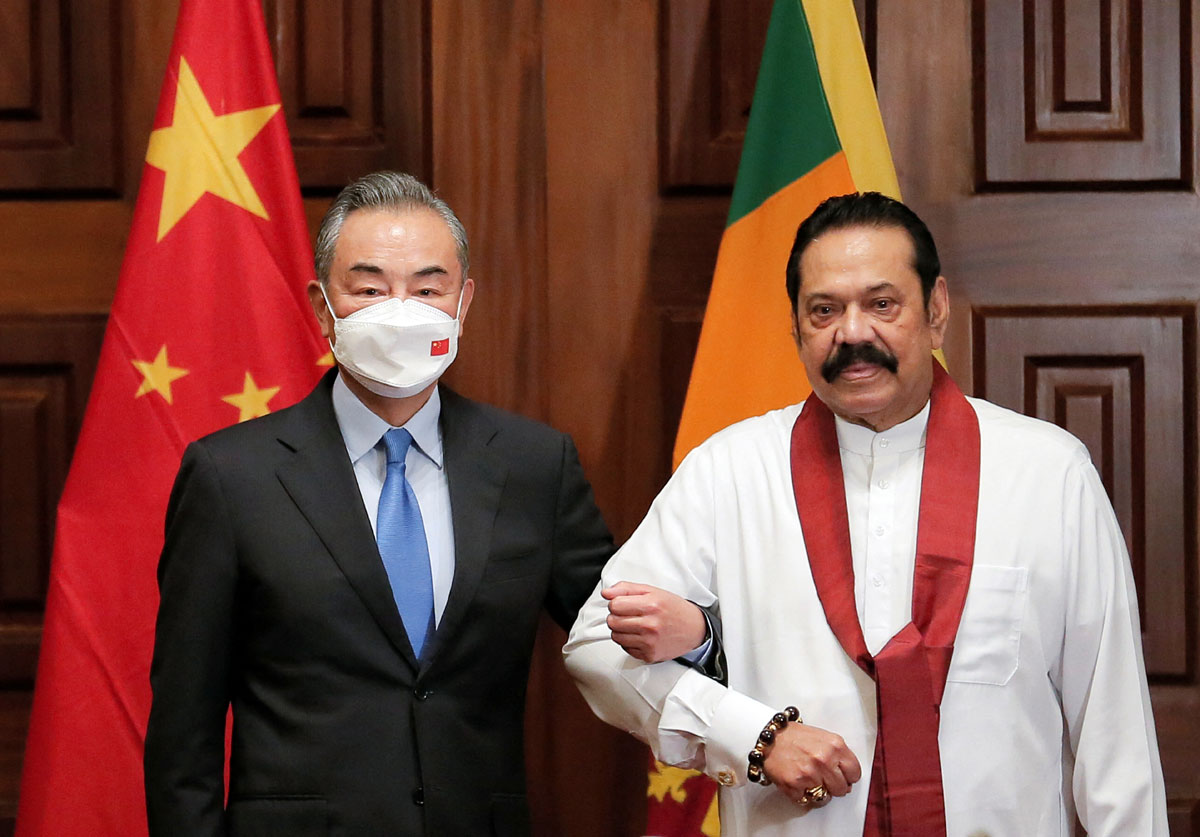 IMAGE: Mahinda Rajapaksa and Wang pose for a photograph. 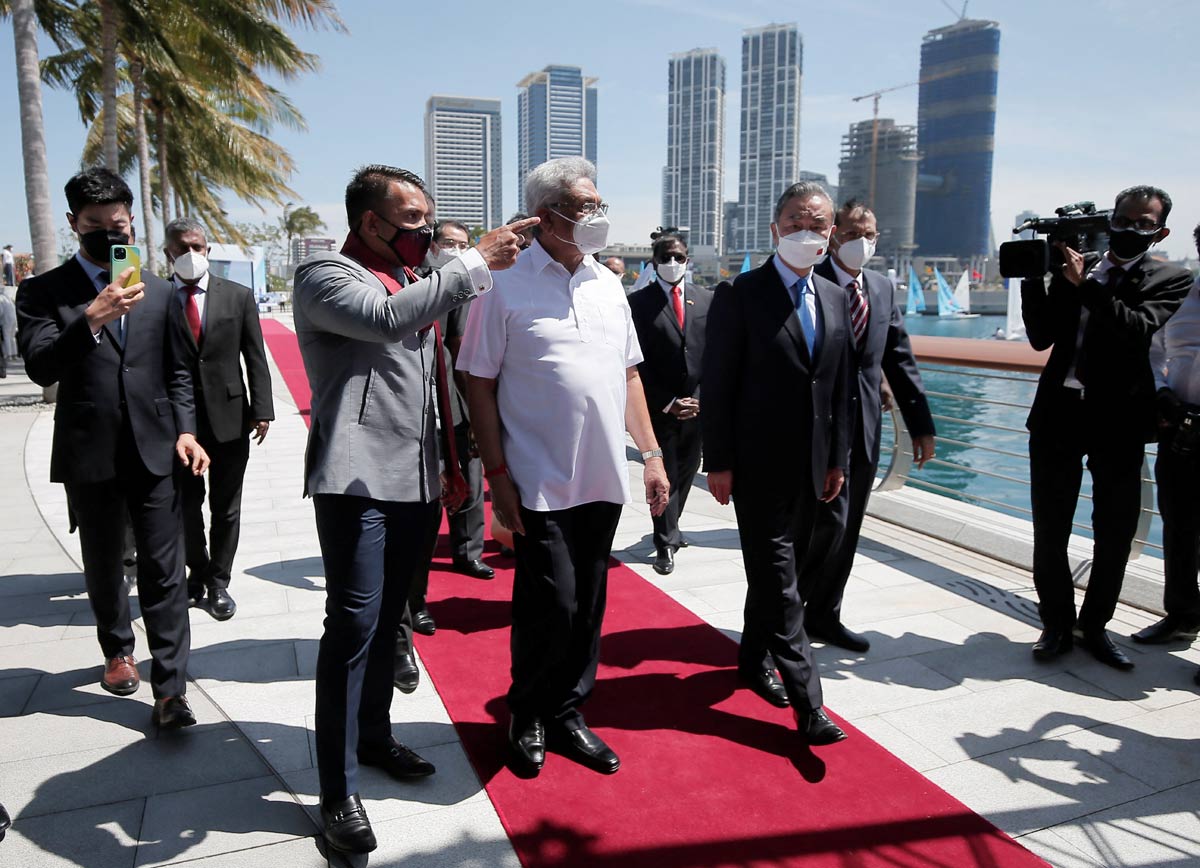 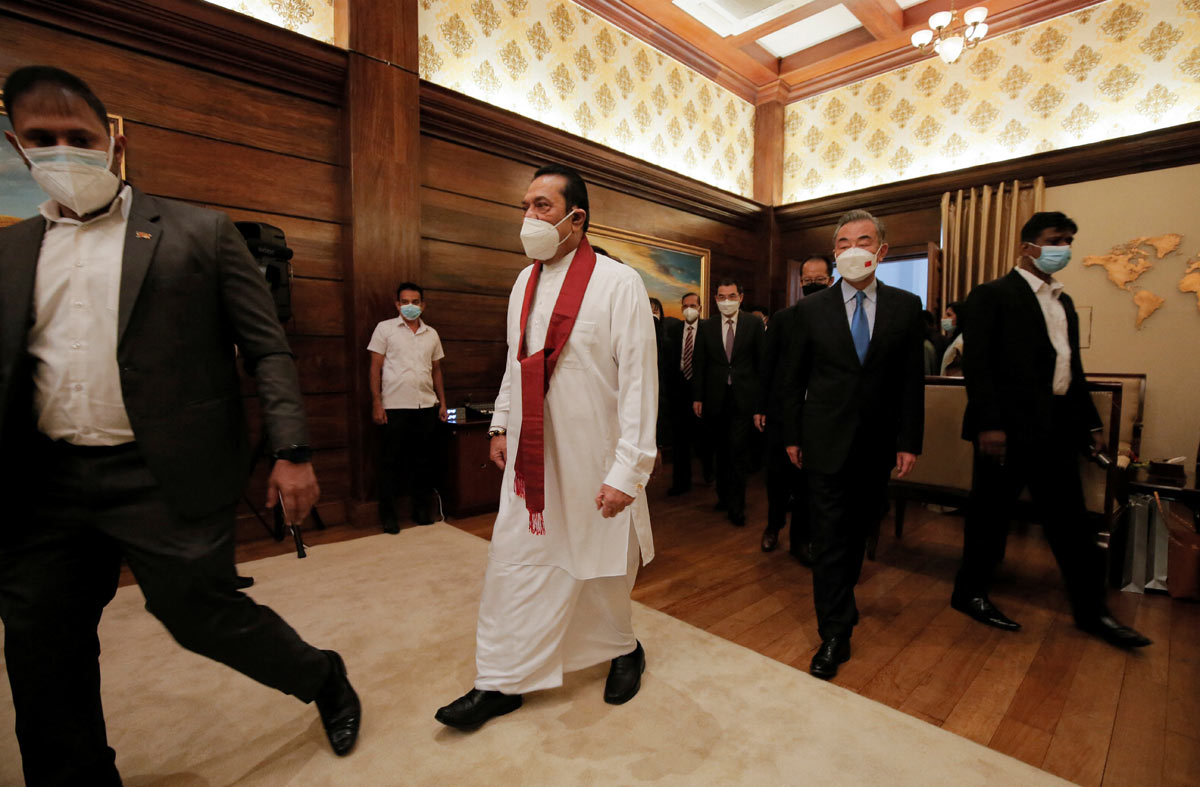 IMAGE: Mahinda Rajapaksa — under whose presidency Sri Lanka moved within China’s orbit — ahead of his meeting with Wang. 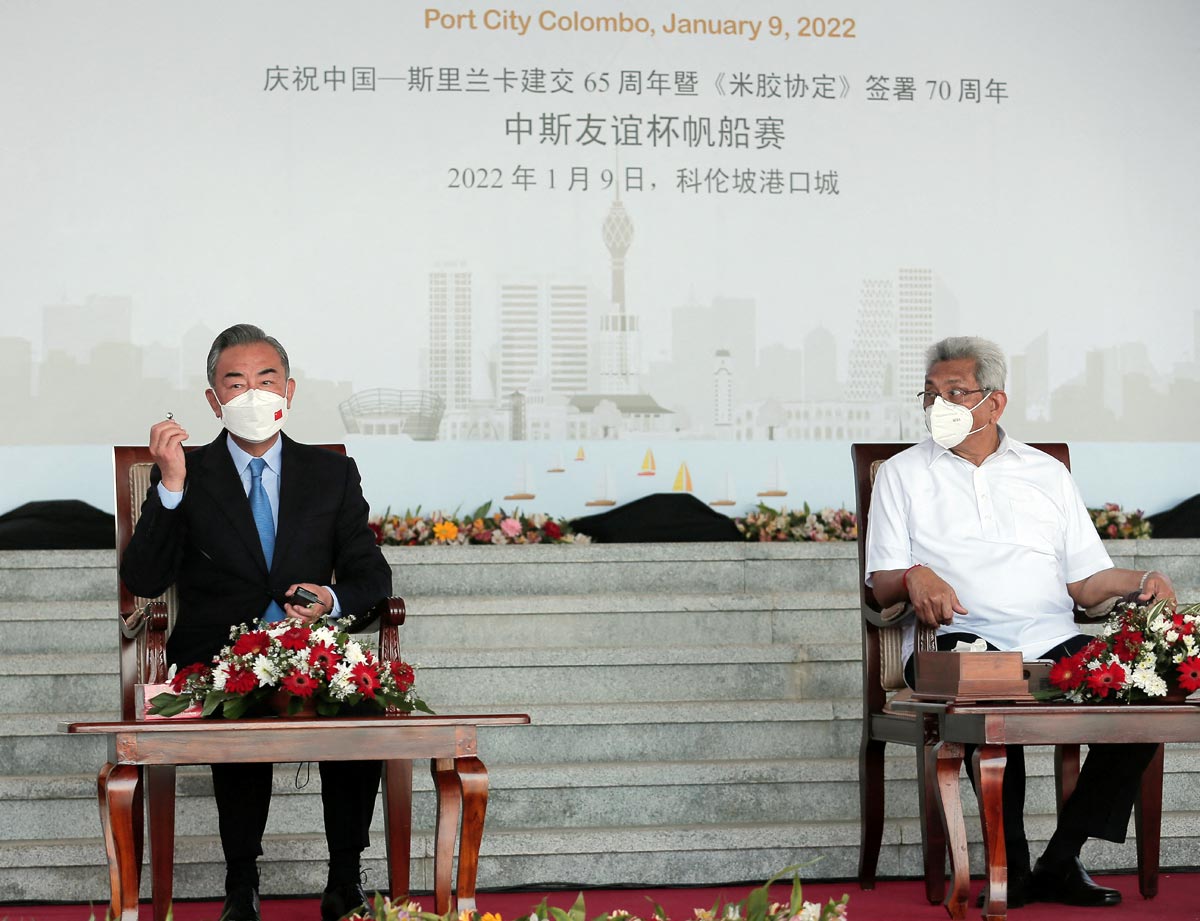 IMAGE: Gotabaya and Wang: The Rajapaksas are widely perceived to be pro-China.