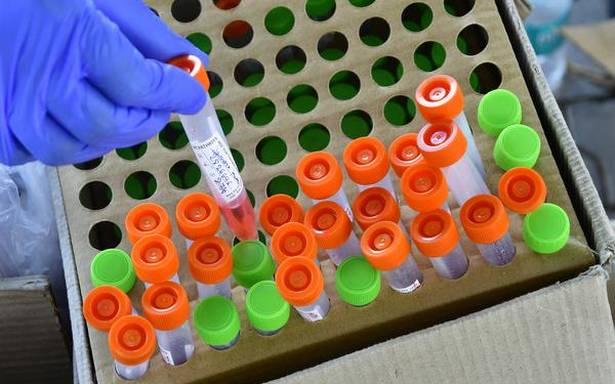 CM to hold a meeting with experts Jan. 4

Bengaluru Urban, which is one of the 15 high-burden districts in the country, added 4,664 positive cases in the last seven days. With 1,041 new cases reported in the last 24 hours, the day’s Test Positivity Rate (TPR) has touched 2.36% causing concern among experts and policy makers. Bengaluru contributes 84.3% (9,575) of the total 11,345 active cases in the State.

Nearly 80.7% of the total cases reported on Monday are from Bengaluru Urban and this has been the trend during the last six days. There has been nearly a four-fold rise in the number of cases reported in the last one week (ending January 2) compared to the previous (week ending December 26).

A look at the zone-wise average positivity trend for the last seven days shows that Mahadevapura has the highest WTPR at 1.23% followed by the East Zone at 1.21%. While the WTPR is inching towards 1% in Bommanahalli and South zones, it is ranging between 0.44% and 0.51% in the remaining zones. Bengaluru now has the second highest number of total cases with 12,66,392 after New Delhi that has 14,54,396, according to data from the BBMP war room.

While officials attribute the sudden rise in cases to cluster outbreaks and movement of international and inter-State travellers, the State’s Technical Advisory Committee (TAC) has reiterated that the situation is worrisome and strict restrictions should be imposed with immediate effect.

Chief Minister Basavaraj Bommai has convened a meeting of experts on Tuesday to discuss the recommendations made by the TAC and take a call on imposing stringent curbs. “Restrictions based on the TAC’s recommendations should have been imposed from January 1 itself when the weekly TPR crossed 1% in Bengaluru. Currently, the WTPR here is 1.43% and as per our classification, Bengaluru now falls under orange zone,” TAC sources asserted.

While recommending weekend and night curfews if the WTPR is between 1% and less than 2%, the TAC has said educational institutions will have to switch to remote learning and offices to work from home if the WTPR is between 2% and 3%. Lockdown should be considered if the WTPR goes above 3%. The committee had earlier fixed the threshold for lockdown as 5%.

According to the TAC’s recommendations, if the WTPR is between 1% and less than 2%, cinemas and auditoria, schools and colleges, pubs and bars, restaurants, offices and factories, recreational clubs, public transport including Metro trains and salons/ barber shops function with 50% capacity.

Malls and shopping complexes should function only between 6 a.m. and 1 p.m. and gathering of people in marriages and social events should be restricted to 200 and 300 respectively.

“The Chief Minister will take a call on these recommendations after examining the daily and weekly TPRs at the meeting with experts on Tuesday,” said K.V. Trilok Chandra, BBMP Special Commissioner (Health).

Pointing out that the civic body had increased the number of tests conducted daily from 25,000 to nearly 45,000, the Special Commissioner said Bengaluru has the highest caseload because more than half of the daily tests are done here.

“We are focussing on targeted testing now and are taking up aggressive contact tracing. All positive and secondary contacts of positive patients are being isolated without any delay. Besides, all ILI and SARI cases are also tested,” the official said.

TAC chairman M.K. Sudarshan, who asserted the need to extend the ongoing night curfew in Bengaluru, said early mitigation measures are essential to avoid a second wave like situation.

“We have also recommended that daily tests should be increased to 1.5 lakh from the 80,000 done till mid-December. This is the beginning of the third wave and people should not be complacent. In fact, they should not wait for the Government to impose restrictions and instead behave responsibly themselves,” he added.