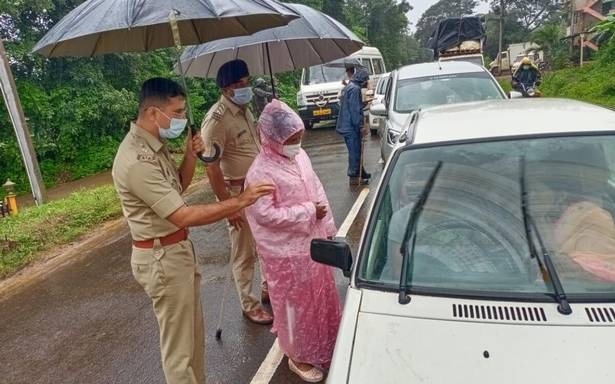 Traders and businessmen say the restriction is scuttling their activities

The border district of Belagavi has sought exemption from mandatory submission of RT-PCR negative certificate from persons entering Karnataka from Goa and Maharashtra.

The district administration has urged the government to allow people to freely enter Karnataka, as the incidence of the epidemic has reduced significantly in all the three States.

“The COVID-19 positivity rate in the two neighbouring States has come down significantly. Belagavi shares a border with these two States. A lot of people need to commute between these States due to business and trade. Such movement would be facilitated if the restriction is removed,” he said.

The State Executive Committee had made a negative RT-PCR certificate mandatory for travellers from the two States, whether they come by bus or private vehicle.

District and Belagavi policy enforced the rule by setting up checkposts on the Kolhapur-Belagavi highway and Sakali-Belagavi highway. Commuters were stopped and their documents checked. Commuters who did not have the certificate but insisted on crossing the border had to undergo a Rapid Antigen Test in a makeshift testing centre set up near the checkpost.

Traders and businessmen argued that this restriction is scuttling their activities. More than once, the district chamber of commerce and industries submitted a memoranda to the Karnataka government to remove the restriction. They argued that Karnataka and Goa were following the old rule, even after the Union Government issued revised COVID-19 guidelines that allow travellers with two doses of vaccination to cross the border.