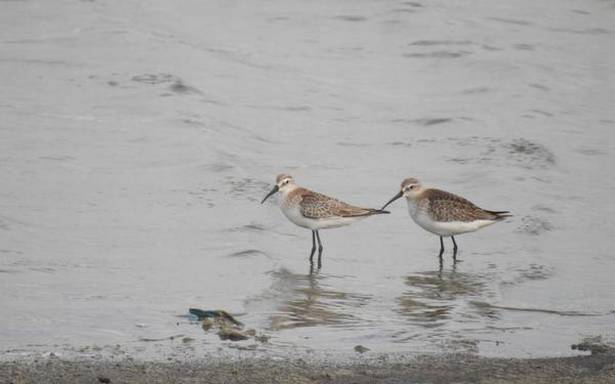 Developmental activities and beautification works in various tanks in Coimbatore district could seriously hamper the habitats of the avifauna, experts and nature enthusiasts warn.

With natural shores lost due to laying of concrete structures and stone walls, the natural habitats of shore birds have shrunk in many tanks.

Clearing of bushes, plants and trees on the sides of the water bodies for beautification works and strengthening of bunds have also caused damage to the habitats of many birds, primarily water birds, they say.

According to P. Pramod, senior principal scientist with the Salim Ali Centre for Ornithology and Natural History, the traditional wetland system in Coimbatore has changed over the years, making them less friendly for avian visitors.

“The tanks in the Noyyal system were designed for seasonal storage of water with natural draining. They had sluices for draining water as against the overflow system now. Tanks with water to its brim will only attract floating birds like pelicans and ducks. Waders, plovers and sandpipers will not be able to use them due to the absence of shorelines and shallow water areas. The development works were carried out in the tanks without considering the ecological aspects,” he said.

While development works and beautification were done in some of the tanks under the Smart Cities Mission, a few other tanks were ‘strengthened’ by the Water Resources Department of the Public Works Department (PWD) under its ‘Extension, renovation and modernisation of Noyyal River system in Cauvery Basin’.

“Kannampalayam tank used to be an excellent place to observe different species of birds, mainly shore birds. Now, the tank is full of water which cannot be used by any of the shore birds,” said Prasath Selvaraj, an independent researcher, who has been observing water birds in some of the tanks as part of his research.

Apart from resident birds, the tanks also attract migratory birds. Some of the long distant migrants make a stopover at these tanks for a few days before they resume their flight.

“Lesser sand plover, Pacific golden plover, Curlew sandpiper and Spotted redshank are among the migrant shore birds that stay for a short period in some of the tanks in Coimbatore. Such birds will skip the tanks if they do not have shorelines,” he said.

Sensing the dangers in the unscientific developmental works, Mr. Selvaraj submitted petition to the Tamil Nadu Chief Secretary, Coimbatore District Collector and the PWD in September 2020. However, no productive measure was taken.

D. Gajamohanraj, a city-based wildlife photographer and nature enthusiast, said that removal of vegetation on the shores of tanks such as bushes, reeds and trees will reduce space for nesting and roosting.

“Natural vegetation also helps in breeding activity. So, such growth on the sides of tanks should be left free for various species of birds and animals,” said Mr. Gajamohanraj, a regular visitor to many of the tanks here.