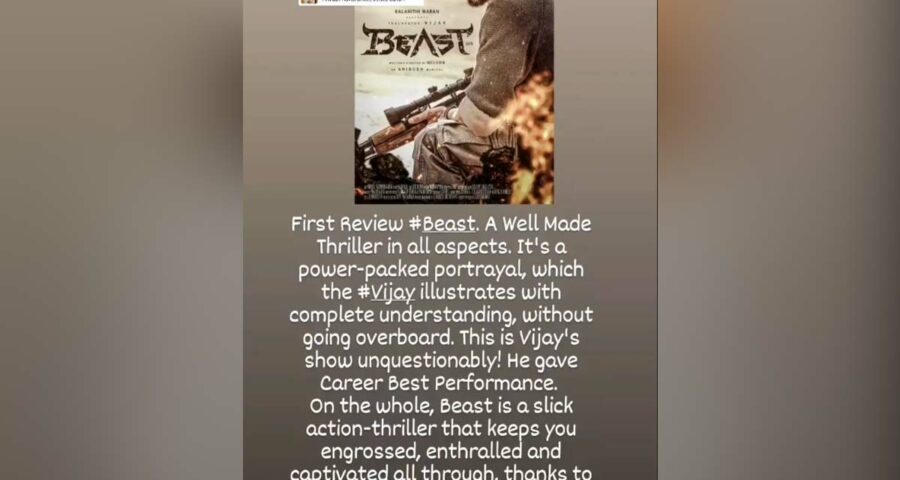 Umair Sandhu shared the first review on  Vijay and Pooja Hegde starrer upcoming action drama Beast from UAE on his insta. Umair Sandhu wrote: First Review #Beast. A well made thriller in all aspects. It’s a power packed portrayal, which the Vijay illustrates with complete understanding, without going overboard.

That is Vijay’ show unquestionably! He gave a career best performance. On the whole, Beast is a slick action thriller that keeps you engrossed, enthralled and captivated all through, thanks to its fascinating premises and a watertight, razo-sharp screenplay. Go for it.

Umair Sandhu gave 4 stars to Vijay and Pooja Hegde starrer Beast. Director Nelson Dilipkumar’s much-awaited action thriller  drama Beast featuring Vijay and Pooja Hegde in the lead, will hit screens on 13th April.   The movie has triggered huge interest among fans and movie lovers. Two songs -‘Arabic Kuthu’ and ‘Jolly O Gymkhana’ from Vijay starrer  that have been released by the unit so far have only gone on to add to the excitement and have raised expectations from the movie even further.

Thalapathy Vijay is essaying the role of Veera Raghavan in Beast. He will be seen as a RAW agent. The movie also has Selvaraghavan, Yogi Babu, Shine Tom Chacko,  Redin Kingsley and John Vijay in supporting roles.