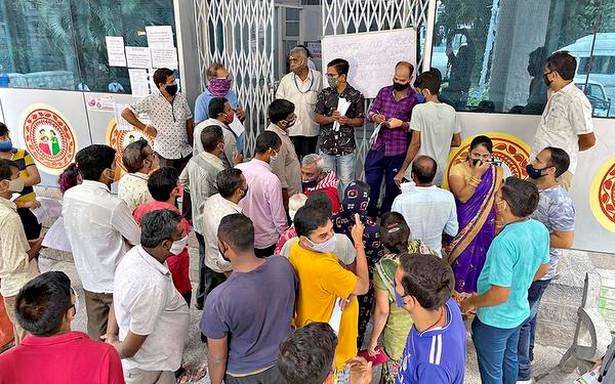 We will ensure there are enough vaccines available for the second dose, says Gaurav Gupta

Speaking to reporters on the sidelines of low-key Kempe Gowda Jayanti celebrations at the BBMP head office here on Sunday, civic chief Gaurav Gupta said in preparing for the third wave, the BBMP was focusing primarily on improving vaccination coverage.

“Over one lakh citizens were vaccinated on Friday and Saturday. In another two days, 50% of the adult population will be vaccinated. While the gap between first and second dose for Covishield is 12 weeks, it is six weeks for Covaxin; we will ensure there are enough vaccines available for the second dose,” he said.

Stating that the BBMP was organising vaccination camps in many places, he urged citizens to avail themselves of the service .

With marriage halls also opening from Monday, Mr. Gupta said that citizens must get permission for events/weddings from the zonal joint commissioners.

“They must provide the complete guest list and permission will be accorded to each guest on the list individually. This way, the responsibility is both on the event organisers and owners of halls/convention centres/hotels, etc.,” he said and added that marshals had already been directed to monitor such events to ensure that COVID-19-appropriate behaviour is adhered to.

The BBMP had set up special desks at Kempegowda International Airport and at railway and bus stations to monitor travellers. “We will be placing extra vigil here,” he added.