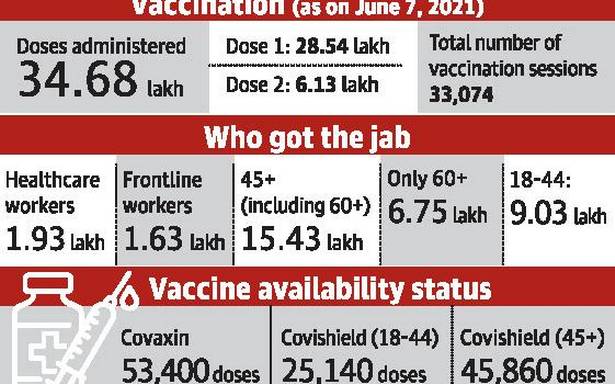 The Bruhat Bengaluru Mahanagara Palike (BBMP) has set a target of administering 30 lakh doses over one month. In close to five months since the COVID-19 vaccinations began, 34.68 lakh doses have been administered to citizens in the city so far.

Speaking to reporters on Monday, BBMP Chief Commissioner Gaurav Gupta said the target is to cover at least 75% of 26 lakh citizens aged above 45 years and 50% of 64 lakh citizens aged between 18-44 years. To achieve this, the civic body would require 27 lakh doses.

“We have been vaccinating around 1 lakh citizens every day. Over the past week, government healthcare institutions have vaccinated 1.67 lakh persons, while private facilities have vaccinated 4.15 lakh citizens,” he said, adding that efforts are being made to identify the uncovered population.

A door-to-door survey is already under way to identify citizens in the 45+ age group who are yet to be vaccinated. The COVID-19 helpline is contacting beneficiaries for the second dose while donor organisations are covering citizens belonging to economically weaker sections of society.

Testing of primary contacts and symptomatic persons is higher in the city when compared to other cities – 66,000- 68,000 tests per day – though the number of tests by private laboratories has come down to 10,000 a day from around 25,000, he said.

“Earlier, people would get tested for want of negative report for work or travel reasons. We were also conducting random testing in railway and bus stations. However, with lockdown and subsequent reduction in cases, we don’t think it is necessary now,” he explained.

In preparation of the third wave, the government is working on increasing the number of ICUs. To overcome the shortage of oxygen, which was a major issue during the second wave, a big push is being given to establishing more plants. Many big hospitals in Bengaluru are establishing their own oxygen plants, he added.