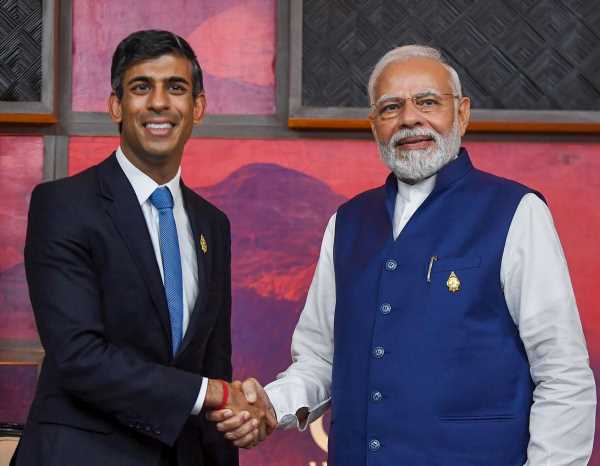 British Prime Minister Rishi Sunak has come out in defence of his Indian counterpart Narendra Modi after a controversial BBC documentary claimed that the British government was aware about the Indian leader having an alleged role in the 2002 Gujarat riots.

During Prime Minister’s Questions (PMQs) in the House of Commons on Wednesday, an Opposition Labour Party MP raised the claims made in the first part of ‘India: The Modi Question‘ that United Kingdom Foreign, Commonwealth and Development Office (FCDO) knew the ‘extent of Narendra Modi’s involvement’, then Gujarat chief minister, in the communal clashes that claimed hundreds of lives.

Pakistani-origin Imran Hussain, member of Parliament for Bradford East, asked Sunak if he agreed with claims in the BBC programme that some UK Foreign Office diplomats believed that ‘Modi was directly responsible’.

“The UK government’s position on that is clear and long standing, and it has not changed,” Sunak responded.

“Of course, we do not tolerate persecution anywhere, but I am not sure that I agree at all with the characterisation that the hon. gentleman has put forward,” the British prime minister said.

The Indian government has, meanwhile, condemned the BBC Panorama programme, which has not been screened in India, as a propaganda piece with a questionable agenda behind it.

“We think that this is a propaganda piece, designed to push a particular discredited narrative. The bias, lack of objectivity and continuing colonial mindset is blatantly visible,” MEA spokesperson Arindam Bagchi told reporters during a press briefing in New Delhi on Thursday when asked about the controversial series.

The first part of the two-part ‘India: The Modi Question‘ programme, which aired on BBC Two on Tuesday, was categorised by the UK taxpayer-funded broadcaster as ‘a look at the tensions between Indian PM Narendra Modi and India’s Muslim minority, investigating claims about his role in 2002 riots that left over a thousand dead’.

The second part of the series, scheduled to be aired next Tuesday, is pegged as a ‘look at the troubled relationship between Indian PM Narendra Modi’s government and India’s Muslim minority following his re-election in 2019’.

‘We strongly condemn the BBC’s malicious documentary India: The Modi Question,’ said Insight UK, among several diaspora groups who have taken to social media to condemn the documentary.

‘Riddled with antisemitism, anti-Hindu and anti-India biases, they have lost many viewers and yet continue spreading their hate without consequence or accountability,’ it added.