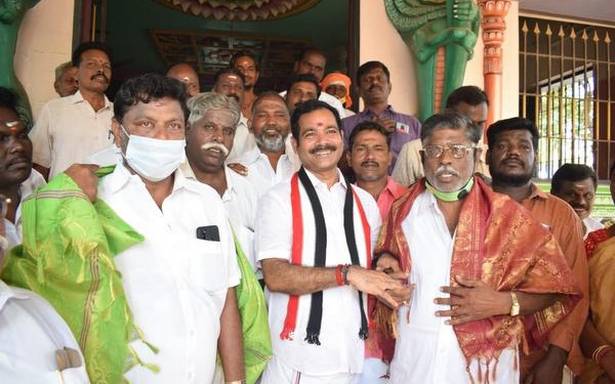 With battlelines almost drawn in all nine constituencies of the district following announcement of candidates by AIADMK and DMK, electioneering has intensified.

The main contestants in Mannachanallur are former Minister M. Paranjothi and C. Kathiravan of DMK. Sitting MLA R. Chandrakar will test his luck for the third consecutive time in Manapparai constituency against DMK-backed Indian Union Muslim League candidate. The main contest in Musiri will be between sitting MLA Selvarasu of AIADMK and N. Thiyagarajan of DMK.

A clear picture on candidates to be fielded by other parties is yet to emerge. Though the filing of nomination began on Friday, the contestants of mainstream political parties are yet to fulfil the procedure. Most of the AIADMK candidates are expected to file their nominations on Monday. Arrangements have been made for taking out rallies before filing the papers.

Meanwhile, most of the candidates of AIADMK and DMK have begun canvassing for votes. Accompanied by their supporters, they engage in door-to-door campaign in their areas.

In Thiruverumbur constituency, Mr. Kumar appealed to residents to choose the two-leaves symbol at Melakalkandarkottai on Sunday.