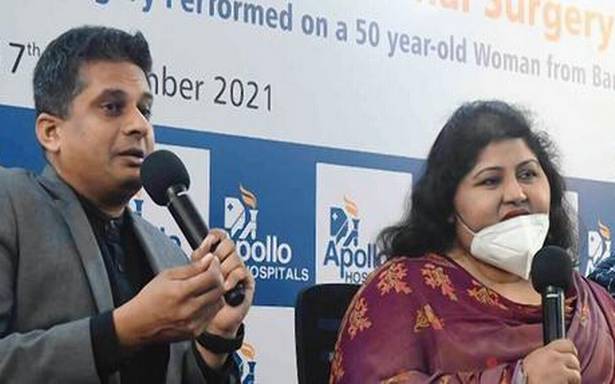 A 50-year-old Bangladeshi national recently underwent bariatric surgery at Apollo Hospitals here. The woman, who weighed 124 kg and had multiple comorbidities, has since been discharged and is doing well.

Taniya Yasmeen had other medical conditions such as hypertension, diabetes, gall bladder stones, seizures and thyroidism. She had undergone hysterectomy and had her gall bladder removed. She told reporters on Friday that she had been under treatment for obesity and related health issues for 16 years. Sometime ago, she was surgically treated for pressure in the brain’s blood vessels but her condition became critical soon as she began developing seizures. Doctors, who treated her for pressure in the brain, said her obesity was causing serious health complications.

During the lockdown, she added more weight and was confined to a wheelchair. She was then referred to Apollo Hospitals.

Raj Palaniappan, director and lead bariatric surgeon at the hospital, said she underwent robotic gastrointestinal surgery done through three robotic ports. He said the patient had been progressively gaining weight since 18 years of age. Of late, she had begun developing numbness in the right lower limb and sleep apnea.

According to him, robotic surgery was the only solution as it would reduce post-operative complications. The precision of robotic suturing helped achieve perfect closure. The surgery that was done on September 8, lasted 150 minutes and Ms. Yasmeen had an uneventful post-surgical recovery period. She was discharged three days later, and will have to come for periodic reviews.

Apollo Group vice-chairman Preetha Reddy said history had been created with the current surgery. “Over 7,000 robotic surgeries have been performed within our system,” she said.