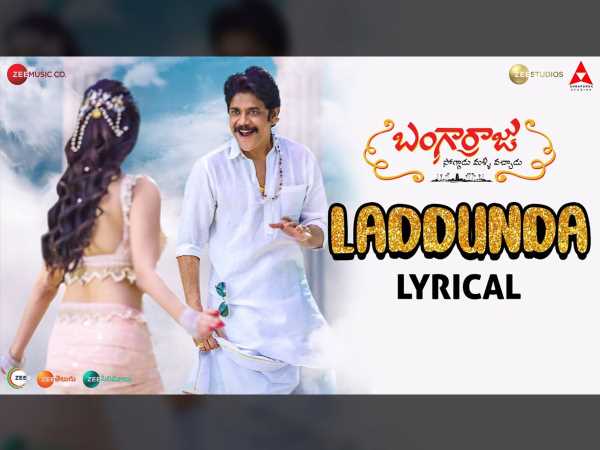 Bangarraju, the upcoming Telugu fantasy drama  in which King Nagarjuna is playing the lead role is one of the much anticipated films of  Telugu film Industry. The movie also has  Ramya Krishna,  Naga Chaitanya and Krithi Shetty in the lead roles.   Today the makers  have released the first lyrical song Laddunda from Bangarraju. Nag’ son Naga Chaitanya also shared the song on Twitter and wrote, “Nana no one can match your swag !.” The  Laddunda song is shot on Nagarjuna and the film’s Rambha, Urvashi and Menaka. Nagarjuna’ trademark Panchekattu avatar is another major highlight of the song.

The song Laddunda is cronned by Akkineni Nagarjuna, Dhanunjay Seepana, Anup Rubens, Nutana Mohan, Mohana Bogaraju and  Haripriya, the lyrics are penned by Bhaskarabhatla Ravi Kumar whereas the music is composed by Anup Rubens. The song is receiving positive response by the music lovers.

Helmed by Kalyan Krishna,  Nagarjuna starrer has the screenplay by Satyanand. Cinematography is being handled by Yuvaraj.  The movie is being produced by Zee Studios and Annapurna Studios Pvt Ltd and its art direction is by Brahma Kadali.

Apart from the lead actors, the movie Bangarraju also has Chalapathi Rao, Rao Ramesh, Brahmaji, Vennela Kishore and Jhansi,  in the supporting roles. its art direction is by Brahma Kadali.