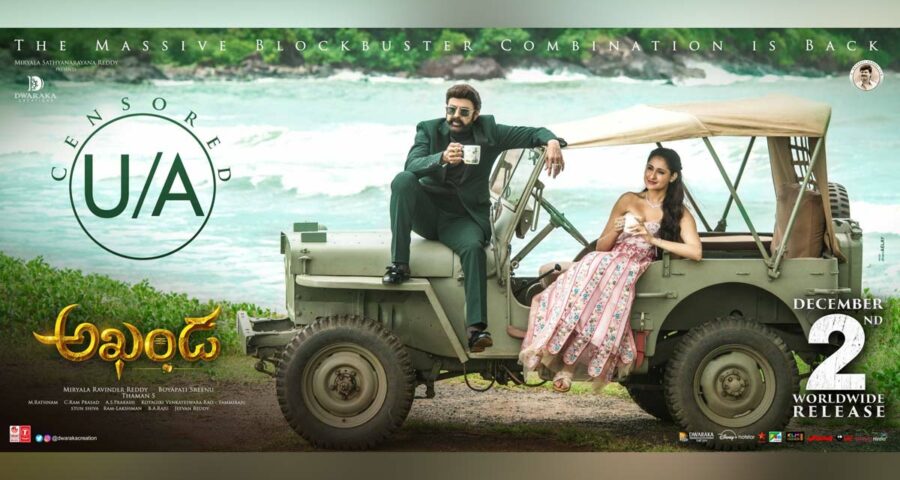 Nandamuri Balakrishna‘s upcoming high-voltage action entertainer, Akhanda,  is slated to hit the theaters on 2nd December and currently the entire team is busy in the promotional activities. Now according to the latest report, the movie Akhanda has wrapped up its censor formalities and received a U/A certificate from the CBFC.  Finally facing all the hurdles,  Balakrishna starrer is gearing up for a grand gala release. Hero Srikanth will surprise everyone in a menacingly powerful antagonist’s role in this film which has Pragya Jaiswal in the female lead role.

Poorna and Jagapathi Babu,  will be seen in prominent roles, the film showcases Balayya as an IAS officer, who takes a spiritual path due to some unforeseen circumstances.

Now Boyapati Srinu’ directorial venture will hit the screens a day ahead of Varun Tej’s upcoming boxing drama, Ghani.  Balalrishna and Pragya Jaiswal starrer Akhanda is bankrolled by Dwaraka Creations and  it has music by SS Thaman  whereas the cinematography  is handled by Ram Prasad.

Meanwhile, Balakrishna’s new film, NBK 107, directed by Gopichand Malineni will go on the floor in the month of December. The sources say that the makers are planning to bring the Kannada actor Duniya Vijay to play the antagonist of the film. Incidentally, the film NBK 107 marks the debut of Vijay in Tollywood.

Balakrishna and Gopichand Malineni film to be shot in US