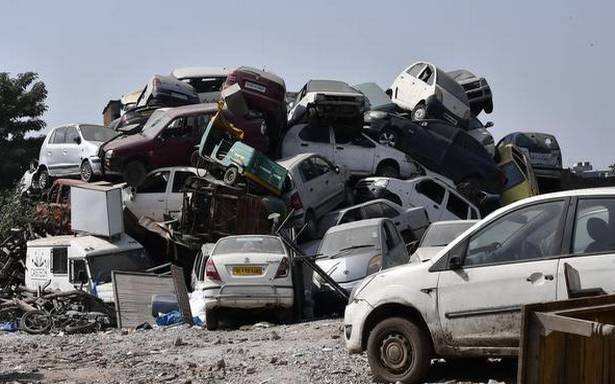 Leading players in the Indian automotive sector have welcomed the Centre’s move to separately announce a voluntary vehicle scrapping policy to phase out old and unfit vehicles.

While tabling the Union Budget for 2021-22, Finance Minister Nirmala Sitharaman said that the policy would help in encouraging fuel-efficient, environment-friendly vehicles, thereby reducing vehicular pollution and the oil import bill.

Vehicles would undergo fitness tests in automated fitness centres after 20 years in case of personal vehicles (PV), and after 15 years in the case of commercial vehicles (CV). Details of the scheme will be separately shared by the Ministry.

Welcoming the voluntary vehicle scrapping policy, the Federation of Automobile Dealers Associations president Vinkesh Gulati said, “If we take 1990 as base year, there are approximately 37 lakh commercial vehicles (CV) and 52 lakh passenger vehicles (PV) eligible for voluntarily scrappage. As an estimate, 10% of CV and 5% of PV may still be plying on road.”

Vipin Sondhi, MD & CEO, Ashok Leyland Limited, said that the implementation of a voluntary scrappage policy is good for the environment and good for setting in motion a circular economy. However, we await further details of the policy as the industry had requested an incentive-based scrappage policy for it to be effective, he said.

Warren Harris, CEO & MD, Tata Technologies, said that the Centre had finally set the tone for the recovery of the auto sector, which has been significantly impacted by the pandemic. This would not only help boost the demand for production of commercial vehicles but also support the entire transportation ecosystem, he said.

“The scrappage policy is a much awaited development where, apart from boosting demand in the sector, it will simultaneously help reduce pollution and fossil fuel consumption while also enabling re-use of steel/aluminium,” Mr. Harris said.

Deven Choksey, MD, KR Choksey Shares and Securities, called it a big game changer for the auto and auto ancillaries sector. According to him, between 2001 and 2005, as many as 7 million passenger vehicles and 11 million commercial vehicles were registered and at least twice these numbers constitute the potential number of vehicles that could be scrapped.

Arun Firodia, chairman, Kinetic Group, felt that it would be a better idea to levy green tax on vehicles that are more than 15 years old, instead of a voluntary scappage policy.