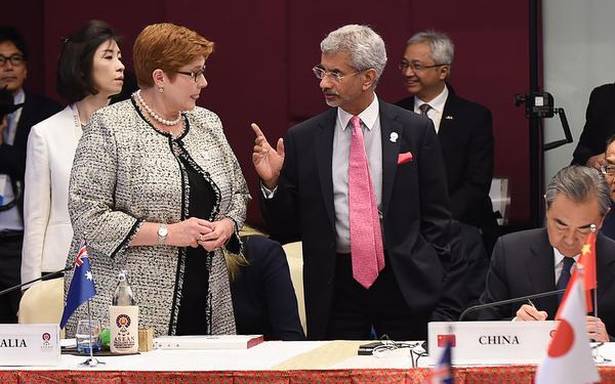 Quad, China, climate change and trade expected to be on the table for talks

Canberra is “deeply disappointed” by the Taliban government announcement this week and coordinating joint strategies to deal with the situation in Afghanistan will be discussed during the first “2+2” double ministerial between Australian and Indian Foreign and Defence ministers.

This was stated by Australia’s High Commissioner to India Barry O’Farrell.

Australian Foreign and Defence Ministers Marise Payne and Peter Dutton will arrive in India on Friday for a number of meetings aimed at expanding bilateral defence, strategic and trade ties, and will meet together with External Affairs Minister S. Jaishankar and Defence Minister Rajnath Singh on Saturday.

“Australia is consulting our closest partners, in ensuring a joined-up approach in any engagement with the Taliban, we’re focused on ensuring the Taliban allows safe passage, ceases violence, pursues an inclusive government, prevents violent extremism within Afghanistan, prevents outward terrorism from Afghanistan and upholds human rights particularly for women and girls,” Mr. O’Farrell told journalists, making a particular mention of the inclusion of the Haqqani network, which has been listed by the United Nations and United States as terrorists, as well as the exclusion of women, members of the Hazara community and other minorities and any members of the previous government.

The Government of India has not issued any reaction to the Taliban announcement of a cabinet of 33 ministers, more than half of which are designated terrorists, including those who have targeted India in the past. On Wednesday, Mr. Jaishankar called for an “inclusive” government in Afghanistan, and any discussions on the issue during the India-Australia talks will be watched closely.

The two Australian ministers are on a four-nation tour, coming to India from Indonesia. They are also travelling to South Korea and the United States. Their visit to Delhi also precedes a meeting between Prime Minister Narendra Modi and his Australian counterpart Scott Morrison in Washington, where they will attend the first in-person Quadrilateral summit along with Japanese Prime Minister Suga, hosted by U.S. President Joseph Biden. They also come as the Malabar military exercises among the Quad are on.

A statement by the Australian Foreign Ministry this week said the talks in Delhi would include cooperation on COVID-19 recovery, climate change issues, critical technology and supply chains, which are all also are part of the Quad’s agenda.

When asked whether the two sides would discuss concerns over China, which both India and Australia have increasing tensions with, Mr. O’Farrell said he “couldn’t see” how meetings on strategic issues between two countries of the Indo-Pacific, and members of the Quad would not discuss China.

While officials said trade issues were “not on the agenda” of the talks, it is understood that the Foreign Ministers will take stock of the talks on the Comprehensive Economic Cooperation Agreement (CECA), that the two Prime Ministers had said would be restarted last year, but has not made any visible progress so far due to differences over market access to dairy products and services between trade negotiators.

During a recent visit to India, former Australian Prime Minister and trade envoy Tony Abbott announced an “early harvest agreement” would be announced by the year-end.

Mr. O’Farrell said, “We have high ambitions from the relationship, and so does India”. A free trade agreement between the two countries would be a signal of the closer alliance that both countries now seek, he added.