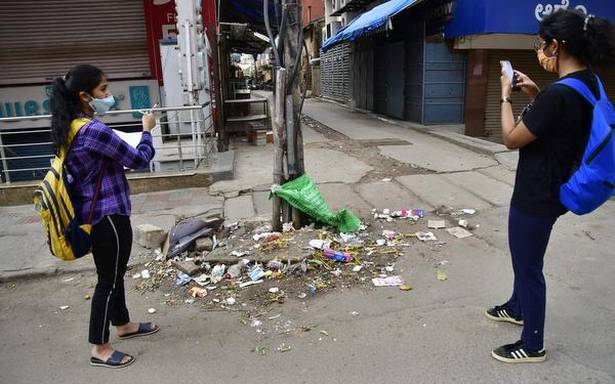 70 citizens are part of the initiative to identify problem areas

Missing kerbs, missing barricades on portions of roads dug up, broken pavements, low hanging cables, unmarked speed breakers… These were just some of the many issues recorded by citizens during the ‘walking audit’ on Saturday and Sunday at Malleswaram.

The ‘walking audit’ is an initiative taken up by Malleswaram Urban Living Lab, a collaboration between Malleswaram Social and Sensing Local. This is aimed at creating a safe pedestrian network in Malleswaram and involves assessing the existing infrastructure and identifying problem areas. Based on the data collected, complete with photographs, a plan will be drawn up to make locality more pedestrian friendly.

Nishitha from Sensing Local said around 70 citizens belonging to different age groups were part of the audit of roads in Aramane Nagar, Malleswaram and Kadu Malleswara wards, all coming under Malleswaram Assembly constituency.

Suchitra Deep from Malleswaram Social said the audit was taken up under the Directorate of Urban Land Transport’s ‘Sustainable Urban Mobility Accord’ (SUMA). Malleswaram is among the nine neighbourhoods in the city to have bagged SUMA, she pointed out.

“Two sessions of the audit have been completed. Another session will be taken up next week in the evening hours to ascertain the status of street lighting,” she said and added that the audit would help them locate, quantify the issues, and present to the authorities concerned the problems that persist.

Aparna Desraj Urs, a resident and member of Malleswaram Social, was part of the audit.

“As residents, we know of the issues. However, by being part of the audit, we looked at these issues with a different lens… this is quite an eye-opener,” she said.

With many roads in Malleswaram dug up for various works, she said pedestrians and motorists have it tough. Many simple issues, such as barricading stretches that have been dug up, can be solved. “However, it is clear that the different agencies that are executing these works are not talking to each other!, she said.