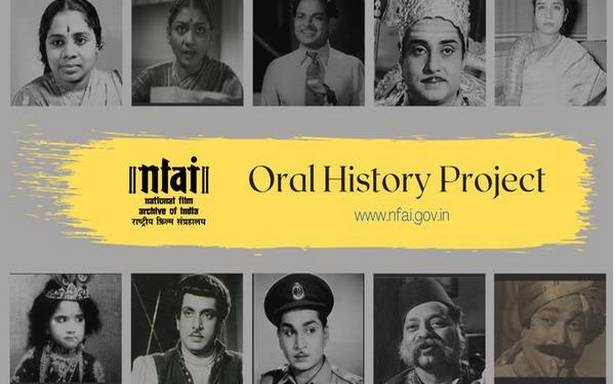 As a tribute to Dadasaheb Phalke, NFAI has published 8,000 minutes of interviews with film personalities on website

On the occasion of the 151st birth anniversary of Dadasaheb Phalke, hailed as the ‘Father of Indian cinema’, the city-based National Film Archive of India (NFAI) has published 8,000 minutes of audio recordings on its website in the form of interviews with renowned artistes and technicians recounting the fascinating journey of Indian cinema.

This oral history project features interviews, recorded in the 1980s, with the ‘who’s who’ of the Indian film industry and offers an invaluable insight into the personalities and processes that have shaped our cinematic heritage right from the silent era.

“All the 8,000 minutes of interviews are now made available on the NFAI website. They constitute a veritable treasure trove of anecdotal reference that can be savoured by cineastes and film scholars alike,” NFAI director Prakash Magdum said.

Conducted mostly in the 1980s, these interviews were recorded as part of the oral history project of the NFAI’s research programme. The project features long interviews of pioneering film personalities which include directors, producers, actors, and technicians narrating their formative experiences, along with stories and anecdotes from the world of cinema.

“One of the prime objectives of the NFAI is to disseminate knowledge about Indian cinema and I am glad that these voices from the past can now be heard across the world,” Mr. Magdum said.

The longest interview in the series is of the late Bengali legend Soumitra Chatterjee taken by Anasua Roy Chaudhary.

“These interviews not only illumine the personal journeys of these artistes but also give an in-depth account of how the Indian film scene has evolved over time,” Mr. Magdum said.

One of the major highlights of this project is a series of interviews of several old associates of Dadasaheb Phalke who closely worked with the legendary auteur.

“These artistes, coming from diverse backgrounds, entered the film industry at its nascent stage and went on to do bit roles in Phalke’s Hindustan Cinema Film Company. India’s first child artiste and Phalke’s daughter, Mandakini Phalke nee Athavale is extensively interviewed where she speaks about working in the role of Lord Krishna as a child in Kaliya Mardan (1919),” the NFAI director said.

Bapu Watve, one of the artistes from Prabhat Film Company and a film historian, took most of these interviews in Marathi.

Noted film historian and writer Randor Guy conducted many in-depth interviews in Tamil, Telugu and English. There are 26 interviews in Marathi, 10 in Tamil, 12 in English, three in Telugu, and two in the Bengali language.

One can click on https://nfai.gov.in/audio_interview.php to listen to these recordings.

“As most of the interviews are four decades old, we decided to digitise them. We also took the help of the sound department of the Film and Television Institute of India to enhance the voice quality of the interviews which have been translated into English so that people across the globe can access them,” Mr. Magdum said, adding that making this rich database available to film lovers was a fitting tribute to the ‘Father of Indian cinema’.