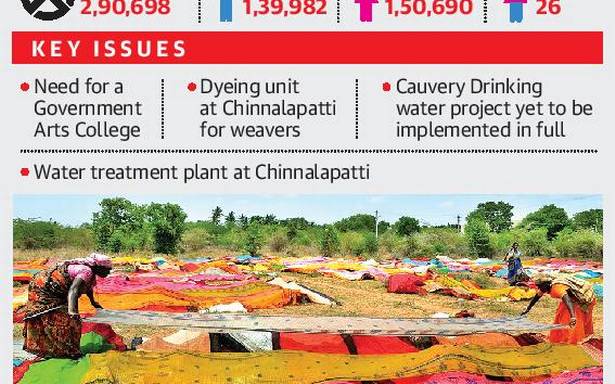 The Athoor Assembly Constituency in Dindigul district is witnessing a multi-corner contest, but political observers watching the segment from close quarters feel that the DMK candidate has an edge over all others.

I. Periasami, former Revenue Minister and deputy general secretary of DMK, who has been successfully elected from this constituency consecutively since 2006, 2011 and 2016, may not have any issues in winning this time too, they say.

The most crucial election for Mr Periasami was in 2016, when the AIADMK fielded its heavy-weight Natham R Viswanathan. However, the DMK registered a landslide victory then by defeating its rival by a huge margin of 27,147 votes. This time, the AIADMK had given the ticket to its ally – Pattali Makkal Katchi whose candidate Thilaga Bama, state treasurer, is, however, confident of emerging victorious.

The PMK candidate told reporters at Athoor recently that the PMK was well placed as the people have decided to reject the DMK this time. " Only Mr Periasami had become wealthier, while the people here were poverty stricken. Moreover, as an MLA, he had done nothing tangible to the people. With his rich experience in public life, he could have brought in agro-based industries. The constituency could have been given an arts/science college. The MLA, who himself had huge cultivable lands, could have solved the water related issues faced by the farmers in Sempatti, Sittayankottai and Seevalseeragu,"

When contacted, Mr Periasami clarified to The Hindu that it was the AIADMK, which has been in power for the last 10 years. Remaining calm for the last nine and half years, now the party and their allies have suddenly woken up and realised that the farmers were up in arms.

Not in a position to solve, the AIADMK members were trying to twist the issue and pass the buck on the DMK. As an elected MLA, he said that he had from his own resources laid pipelines for drawing water from Marudanadhi to hundreds of villages in the belt. Likewise, he had raised funds and mobilised JCP, cranes and other equipment with which tanks in and around Kudaganaru were desilted.

The Cauvery Integrated Drinking Water project was finalised by the DMK government in the early 2000. However, when AIADMK came to power in 2006, the then Chief Minister Jayalalithaa shelved the project to Athoor as the AIADMK was defeated in the constituency, the DMK members alleged.

Though farmers appeared to be divided on supporting the DMK this time, the campaign managers of Mr Periasami were sure of romping home victory by a huge margin this time.

Not in a mood to accept the popularity wave behind Mr Periasami, the PMK candidate, sure of giving a shock defeat to the DMK strong man, challenged him for a debate on the Kudaganar water issue. However, Mr Periasami played it down saying that he would be ready for a debate only with people who understood the issue.

Yet another issue revolving with high expectation in the constituency is the weavers from Chinnalapatti, which is a part of the segment, had been demanding for a treatment plant. The dying units here also have other logistics issues.

The constituency has a good number of youth going to other towns to pursue higher education. Hence, a government arts/science college here would be welcome.

The farmers’ here produced the highest volume of paddy, followed by other commodities. However, lack of storage facilities and absence of agro-based units had kept the farmers to always look at subsidies and waivers. If the standards of living of the farmers were to improve, more and more industries alone would be the answer.

Apart from the DMK and PMK, the AMMK has fielded Selvakumar, who is set to take away ‘ majority’ of the votes that may go in favour of the PMK. With the absence of the AIADMK functionaries in the constituency, the DMK looks like having an edge. The NTK and MNM are also in the race.