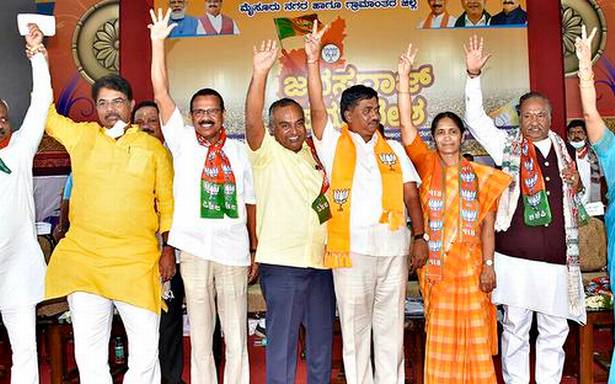 Siddaramaiah’s dream of becoming CM again will be dashed: Eshwarappa

The BJP launched the Jan Swaraj Yatra to interact with eligible voters and drum up support for its candidates in the forthcoming Legislative Council elections.

The yatre for the Mysuru-Chamarajanagar region entailed discussion with party workers and candidates to chalk out their strategy for the elections.

In Mysuru, Mr. Ashok said the BJP had a head start over both the Congress and the Janata Dal (Secular) which, he said, were in a state of confusion and disarray. He said the BJP Government had initiated lot of good works and this should be effectively communicated to the people at the grass-roots level. “We need leaders to air the problems and speak for the Mysuru-Chamarajanagar region in the Council and hence it was important for the party to win the elections,” he said.

Mr. Ashok said under the Congress corruption had reached sky high and the late Rajiv Gandhi himself had stated that out of every hundred rupee released by the Centre to the village, only ₹15 percolates to the beneficiaries. But under Prime Minister Narendra Modi, the money is transferred directly to the bank accounts of the beneficiaries and there is no corruption,” he added.