Aided by the $57.8-billion merger of HDFC Bank and HDFC, India Inc reported its highest ever mergers and acquisitions in calendar 2022 at $171 billion as against deals worth $145 billion announced last year. 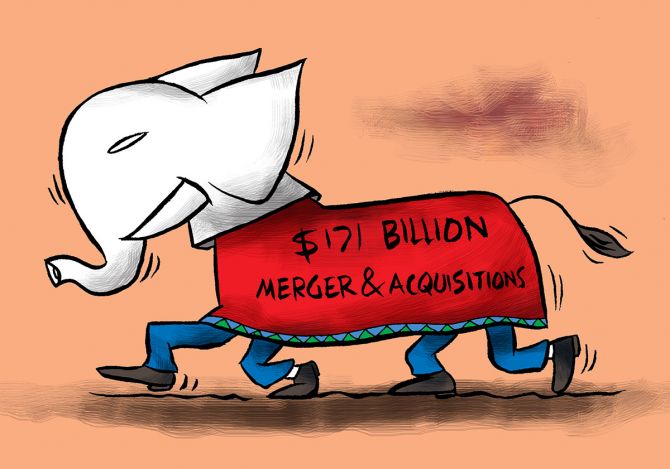 The acquisition by the Adani group across cement, media and ports dominated the headlines with the conglomerate making its foray into the cement sector by buying Swiss materials firm Holcim’s stake in Ambuja Cements for $6.5 billion.

The Adani family’s additional $4-billion open offer for Ambuja did not get a response because shareholders preferred to stay invested with the new owner.

Apart from the Adani group’s Haifa port acquisition, during the year, Biocon Biologics, a subsidiary of Biocon, completed the acquisition of Viatris’ global biosimilars business in a part-equity, part-cash transaction worth $3 billion, making Biocon Biologics a world leader in biosimilars with eight commercial products.

Back home in India, among other Indian conglomerates, Tata Steel acquired Neelachal Steel for $1.6 billion from the Indian government.

And ArcelorMittal got the Essar group’s five-million-tonne-a-year (MTPA) jetty at the Hazira port terminal and a 12-MTPA jetty in Paradip, along with a dedicated conveyor that handles the entire pellet shipments from Arcelor India’s Paradip pellet plant, and a 270-Mw multi-fuel power plant in Hazira for $2.4 billion (Rs 16,500 crore).

Bankers said after the blockbuster year the outlook for M&As would build on the momentum this year and was expected to be robust next year, driven by financial sponsor interests, moderating valuations and expectations, a marginally tighter financing environment, and changing geo-political priorities — leading to control transactions as distinct from minority transactions.

“The inbound strategic interest into India in a post-Covid world is expected to pick up momentum, driven by a desire to have a meaningful local presence in one of the largest and fastest-growing economies of the world,” said Sourav Mallik, joint managing director, Kotak Investment Banking.

In 2023, bankers said a lot of action was expected in the domestic market even as cross-border acquisitions would see a slowdown due to fears of a recession.

JP Morgan topped the league table of M&A bankers in terms of advising companies on transactions, followed by BNP Paribas.

“Domestic M&As would be led by consolidation in the new-age tech space, where, given the funding slowdown, quite a few players would be forced to go the M&A way.

“Another catalyst for domestic M&A would be the large conglomerate and private equity buyouts, which will keep on the acquisition spree going,” said Gopal Agrawal, managing director and head (investment banking), Edelweiss Financial Services.

Bankers said the sale of the government’s stake in Concor, a logistics firm, and IDBI Bank would be the most watched deals in the first quarter of 2023.

At the same time, the sale of Reliance Capital and Srei assets in the ongoing auctions would keep the bankers busy.